Huddersfield vs Liverpool – What do the FOAR writers think?

The time has come.

After what seemed like an endless, inexhaustible, excruciating, interminable – and every other synonym for ‘too bloody long’ – international break; finally real football returns.

It’s David vs Jürgen, old mates at either end of the footballing pyramid. One fighting relegation, the other fighting off enamored advances from besotted Reds all over the world. One bottom-3 and cannot find a win, the other top-3 and don’t know how to lose.

It’s Huddersfield vs Liverpool at The John Smith’s Stadium.

For something different this week, some of the writers here at Fields of Anfield Road have provided a few words on their thoughts, hopes (dreams, aspirations, yearnings, hankerings etc.) and score predictions for today’s clash in West Yorkshire.

Huddersfield was the first English side to win the top division three years in a row (1924-26) but the last hundred years have been a bit less trophy-laden. Whatever anyone on here claims to believe, this game should yield three cosy points for the reds. We may be missing some of our usual starters but we should still have more than enough to overcome them and I’m predicting a healthy three-nil win. Expect Klopp and Wagner to be terribly complimentary about each other. Don’t expect a nail-biter – it’s smoking jackets and arm chairs all the way with this one. – @SimonjGarrett

Don’t know about you, but I can certainly see Herren Klopp and Wagner donning the smoking jackets and enjoying a Riesling post-match. A straight forward 3-0 Liverpool win for Simon.

If you go by the two games last season against Huddersfield, then on paper this game looks to be a stroll in the park as we comfortably beat them 3-0 home & away. I think that this time it will be a much tighter game than the last two. The international break might mean changes to the starting line-up – Mane looks likely to miss out after undergoing minor surgery on his thumb. So perhaps one player’s misfortune gives another player a chance to shine. I’m predicting a 2-1 hard fought victory, Sturridge and Firmino the scorers. – @JasonBranagan79

I’m feeling a lot more optimistic since our injury news has improved ten-fold with some key players back in contention. Hard to predict the line-up due to whether or not Klopp will risk the players recently back from injury or give some of our talented bench warmers a chance to shine. Never an easy game away from Anfield but I’m predicting a 3-1 win to us. Not expecting a humdinger by any stretch of the imagination but definitely expecting three points on the board to keep us right up-top alongside our competitors! – @AnneLizaWalsh78

A solid enough (but no ‘humdinger’) 3-1 win for the Reds according to Annie. Humdinger is a word I don’t get to write down nearly often enough.

Huddersfield have endured a difficult start to their second season in the Premier League, earning three points in draws. Some may argue it is down to the quality of teams that have come up, barring the obvious exception of Cardiff, making the fight for survival all the more difficult. Although Huddersfield put in a valiant performance against Burnley before the International Break, I would expect another difficult day at Kirklees for David Wagner’s men. Put simply, this has to be treated as a must-win for Klopp’s men, regardless of injuries. I’m going with a 2-0 win to the reds. – @FarrellKeeling

The Terriers are in for another bad day at the office, according to Farrell. A simple 2-0 Liverpool win.

The squad should be fresher after a less intense international break, compared to the nightmare run of games they’ve just completed. David Wagner knows Klopp well and I’m expecting to have to overcome a well organised defensive unit, however I think Liverpool possess the quality to break them down, will dominate the ball and ignite some form back into the front 3.

Ben thinks we’re in for a typically one-sided affair and the front-three will finally find their way in a 3-0 Liverpool win.

I expect Klopp to make a few changes from what is considered his strongest 11 as the curse of the International break strikes again meaning members of the Liverpool squad currently look like ‘Extras’ from Holby City. In defence don’t be surprised to see Lovren step in for VVD as he continues to recover from two broken ribs. A centre back pairing of Gomez and Lovren should be more than capable of dealing with the Huddersfield attack who have found goals hard to come by this season. In midfield the most likely trio to start would be Fabinho, Henderson and Wijnaldum due to the injuries recently sustained to Keita and Milner although the latter has now been deemed fit to play. And in attack I expect to see Shaqiri come in for Mane who has had surgery on his hand this week. Meanwhile, I think Salah is fit, he 100% starts. Liverpool 3 Huddersfield 0 – @Fcounting

Lee reckons that, despite changing the pack, the Reds have enough about them to walk home to a comfortable victory. Another 3-0 Liverpool win.

And that, as they say, is that. Six predictions, six wins and I wouldn’t like to argue.

The thing is… with my record of predicting scores, I would be better off saying that Huddersfield will spank us 6-1 à la Stoke 2015. But no, I’ll jinx it again and say we’ll pump them 4-0. Fingers crossed, eh? 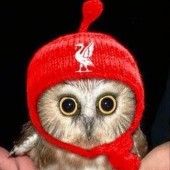