Having beaten Burnley at Turf Moor only three days before, Liverpool traveled to Bournemouth to open the 16th round of the 2018/19 Premier League season on Saturday, December 8, 2018.

A win would have taken the Reds to the top of the table, if only temporary, but it would be the best chance possible at this point to make the position theirs for more than that, as league leaders Manchester City played away at Stamford Bridge later in the day.

Apart from Alex Oxlade-Chamberlain, Jurgen Klopp was without the services of Joe Gomez who suffered a fracture of the lower left leg in the midweek clash with Burnley. This made Joel Matip a certain starter as Dejan Lovren still hadn’t recovered from a head-clash suffered in training. It was a slightly different case with Sadio Mane, who was still recovering from a cut in the foot but made the bench. In the absence of Gomez, the boss chose to put James Milner at right-back and leave Trent Alexander-Arnold on the bench; probably with the Napoli game on Tuesday in mind.

Bournemouth manager Eddie Howe had a few problems of his own. Midfielders Dan Gosling and Lewis Cook were out with knee injuries, and he was also without striker Callum Wilson who had a hamstring problem.

Bournemouth set out on a mission not to be a pushover, and the game started with a nice dose of balance. Apart from a nervy moment from Alisson in the 3rd minute, both sides seemed very focused on the task at hand, always moving the ball quickly and in the right direction.

But after 12 minutes, a nice pass for Salah caught the Bournemouth defence napping as they expected the flag to go up. It was a tight call, but the linesman chose not to act, and as Salah brought it down for Firmino and the Brazilian tried to employ him once again, Nathan Ake deliberately stretched out his arm to play the ball and got into the referee’s book for it. It was a good position at around 25 yards and Shaqiri let one fly, but only to hit the wall.

Two minutes later Jefferson Lerma became the second name in the book for a late challenge on Fabinho.

The Cherries seemed shaken and sloppy for a while at this period, which enabled Liverpool to often pick their pockets and launch quick moves forward, but the Reds failed to make any of them count. They did however, threaten rather seriously in the 20th minute as Robertson squared a long pass into the box and Begović prevented Salah from scoring, and Keita’s shot on the followup got blocked.

The home side responded to that one, however, and King whipped one towards Stanislas inside the six yards, but Stanislas couldn’t get there in time.

But in the 25th minute, the Reds were ahead. Firmino was left with enough space to shoot at some 25 yards, and it was a such a rocket that Begović couldn’t keep hold of it. Salah was the quickest to react. 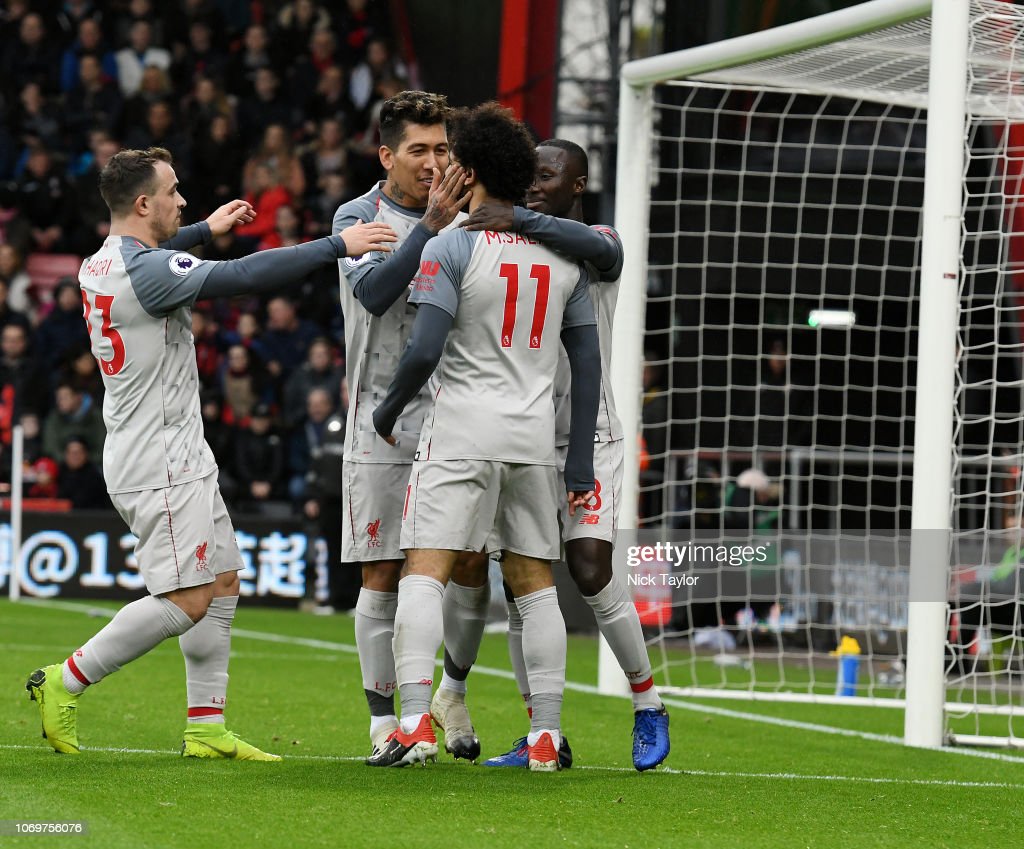 The frozen image subsequently revealed that the Egyptian had been a foot offside, but until the VAR technology steps in next season, it’s hard to expect the officials to get such tight decisions right every time.

Bournemouth tried to respond again and they spent a few minutes in possession of the ball inside Liverpool’s half, but all they managed to do was to circle the box for a while before giving it cheaply away. It was followed by another such spell, and then by an extremely physical battle. This, naturally, suited the disposition of Bournemouth players more and the improvement in their approach was evident, but time was passing and Liverpool still had the lead.

The Reds held the ball and made a few probes in the two added minutes past the 45, but they couldn’t break through the Cherries’ lines of defence.

The second period started in the best way possible for Liverpool. Three minutes in, Salah was on target again. He was put through by Firmino and had a run at Ake. He got clipped deliberately from behind by Steve Cook but stayed on his feet, and then put it into the bottom corner from around 12 yards with a help of a slight but kind deflection off Ake. There was nothing Begović could do. 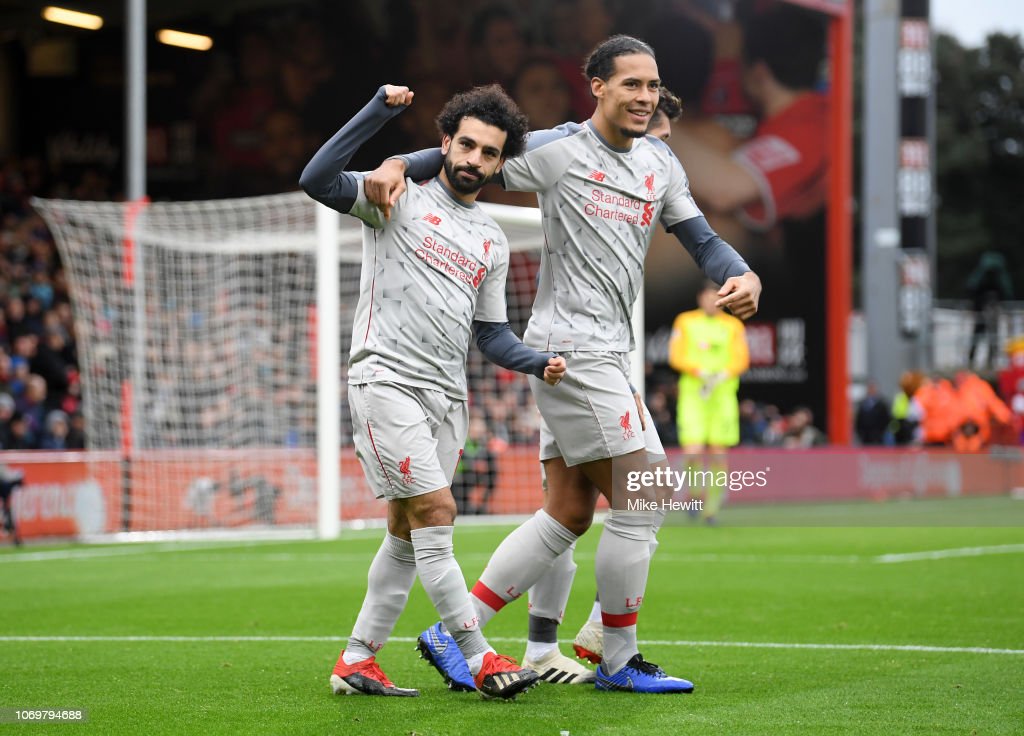 Bournemouth again tried to push forward straight away, and in the 53rd minute they had a penalty shout as King left a leg dangling and fell over Alisson, but referee Lee Mason wasn’t interested.

Five minutes later, some lovely training-ground stuff almost left Salah eye-to-eye with Begović, but the Egyptian was rightly ruled offside on that occasion.

From that moment on, Liverpool kept the game firmly under control. They kept possession with ease, employing the ‘pass and move’ philosophy with great skill. However, Klopp decided to make a double change after 65 minutes. Sadio Mane and Adam Lallana stepped out onto the pitch while Shaqiri and Keita left it. Howe took the opportunity to act as well, and he took off midfielder David Brooks to make way for striker Lys Mousset.

Two minutes later Cook’s day went from bad to worse. Having already failed to stop Salah from scoring the second goal, a cross by Robertson bounced awkwardly off the inside of his leg and ended up in the net. 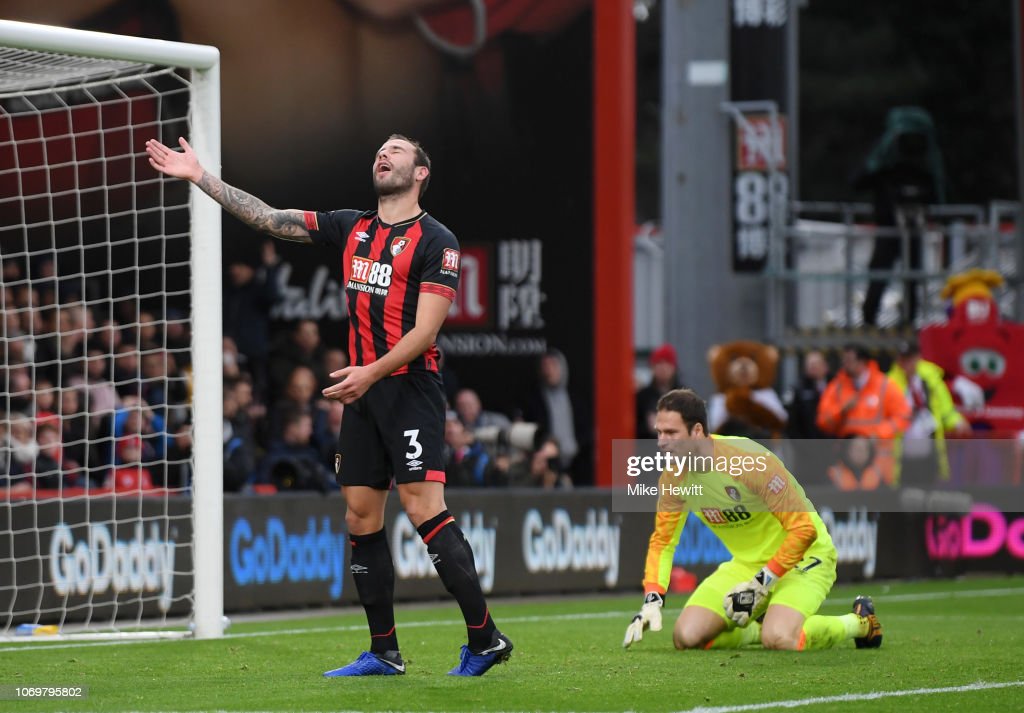 Sixty seconds later, Fabinho rightly found himself in the book for a late challenge on Lerma. It was some 30 yards out, and Stanislas sent it straight into the top corner, but Alisson was expecting it and he picked it up comfortably.

After another sloppy period, the Cherries seemed to have gathered their strength for another strong push, and Mousset did manage to put one past Alisson in this period but it was rightly ruled out for offside.

And then, just as they were going at it again, Salah showed them how it’s done and completed his hat-trick. Lallana whacked a long pass in behind and the Egyptian showed his marker what pace means, went around the onrushing Begović, kept his head and coolly put it in the net. 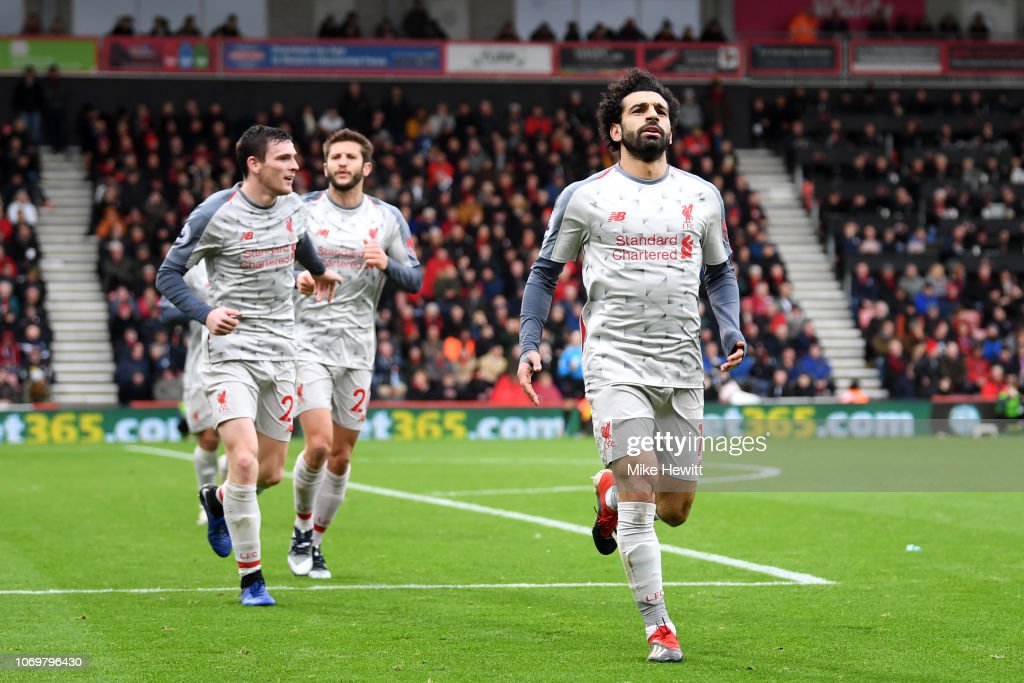 With 10 minutes remaining, Firmino went off to be replaced by Jordan Henderson. Two minutes later, Howe took out Daniels and Stanislas and sent on Tyrone Mings and Diego Rico.

After conceding the fourth goal, all of Bournemouth’s resilience seemed to have vanished. They looked like they were applying a damage limitation approach, but it wasn’t very clear whether they intended it or simply had no strength left for anything else. Liverpool were cruising.

Lallana was forced off the pitch two minutes from time to get some medical assistance after suffering a blow to the head, but apart from the need to change his shirt, everything looked fine with the player who played in the youth categories at Bournemouth, and the game ended without further excitement.

A very good performance, another clean sheet and an excellent result for the Reds. The question about the opening goal can be asked and it would be a valid one, but there can be no doubt whatsoever that the better team won the day. Three goals in the bag for Mo Salah, and three points in the bag for Liverpool, who have now gone to the top of the table.

Now the real fun begins. Anfield is set to host a fantastic pair of games. Liverpool simply must beat Napoli on Tuesday to progress to the Champions League knockout stages, either by 1-0 or by more than one goal.

And after that, it’s out old friends Manchester United.