And so it came. The big show, the big European night at Anfield, one that would decide many things for the rest of the season. It was the last round of the Champions League group stage, a game that Liverpool had no alternative but to win in order to progress. And even that, in itself, wouldn’t guarantee passage to the knockout stages. It had to be either a 1-0 win, or by more than one goal. The opposition – Napoli.

The experience in Naples wasn’t a very pleasant one. The Reds were outplayed and deservedly beaten by 1-0, and the game seemed to have set the tone for other two away games in the competition; defeats to Red Star Belgrade and Paris Saint-Germain. However, Liverpool had won against both of those teams at Anfield, and that sounded hopeful; as far as it went.

Jurgen Klopp was bereft of the services of Alex Oxlade-Chamberlain (knee, out for the season) and Joe Gomez (left lower leg fracture), but Sadio Mane was back in contention after a short spell on the sidelines. Dejan Lovren was a doubt, but he made the bench.

Carlo Ancelotti, a man Liverpool have faced in a number of huge European games, was without Simone Verdi and Vlad Chiriches. Speaking ahead of the game, the experienced Italian said he knew what Liverpool were going to do, and revealed that his team hadn’t come to Anfield to sit back.

Liverpool players started the game rather nervously. The visitors seemed more composed, more in control of what they were doing, and for a while they controlled the midfield. However, it was Liverpool who threatened first after seven minutes as they hit the visitors with a good counterattack, and Robertson produced a fantastic pass for Salah who was totally unmarked at ten yards, but the Egyptian failed to control it properly. Napoli responded over Mertens and Hamšik, but the Slovakian’s shot from just outside the box fizzed over the bar. Milner had a good chance next, but he missed the target as he headed a good cross by Trent.

Referee Damir Skomina made a funny decision in the 13th minute. Van Dijk made a tackle on Mertens and clearly got the ball, catching his opponent on the followup. Not only did Skomina give Napoli the foul, but he also booked Van Dijk.

But Liverpool’s game picked up at that point. They were now winning battles in the middle of the pitch and they pressed the Italians back with determination. Wijnaldum, Henderson and Milner started getting comfortable, but the front three still weren’t connecting properly. Salah had a run at defenders a few times, but they were well prepared for his usual trickery, and Koulibaly was colossal in that back line.

The Reds did break through in the 22nd minute and Mane hit the back of the net, but Trent’s cross had found him in an offside position. Napoli responded again by threatening after a corner as Liverpool’s defending looked very reminiscent of the last several seasons, but nothing came of it. Then it was Liverpool’s turn again, and after they created a dangerous scramble inside the box, Skomina gave a foul by Mane on Ospina and only he knows why. The Slovenian referee again hurt Liverpool a minute later as Milner and Firmino worked well to dispossess Allan in the middle. He gave another foul with absolutely no reason to.

But the Reds were now seriously knocking on the door, and in the 34th minute they broke through.

Koulibaly may had won everything between him and Salah up to that point, but Mo utterly beat him as he skated past coming in from the right, and slotted through the legs of Ospina into the net. 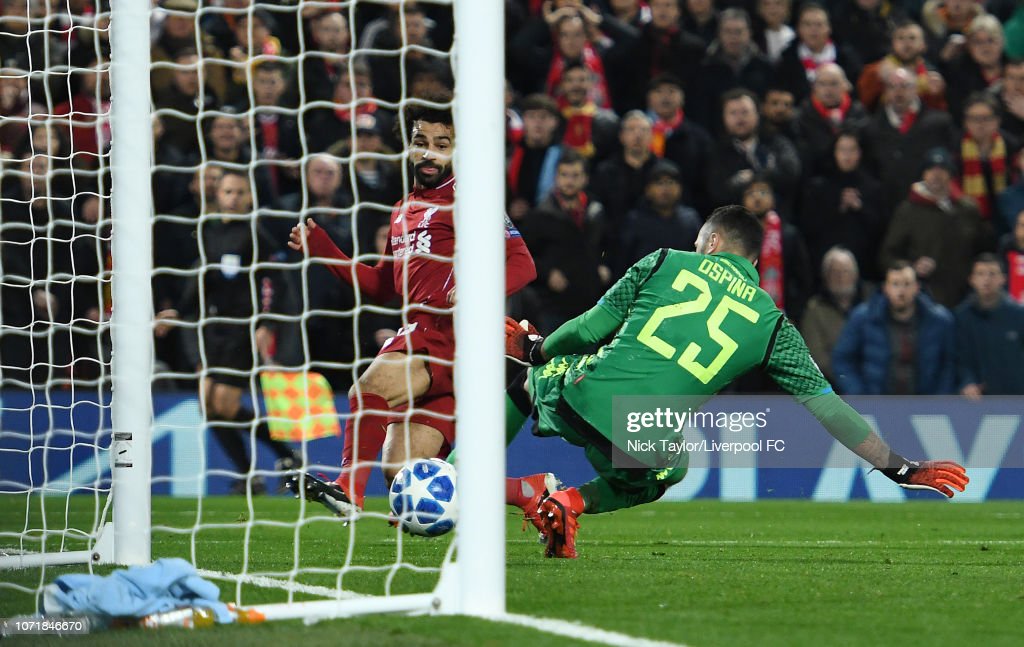 Three minutes later, Alisson misplaced a pass and gave Napoli a chance, but the Reds kept a high defensive line and caught Fabian Ruiz offside. The moment did give the visitors a little boost and they attacked for a few minutes, but Liverpool quickly pushed them back again, and Koulibaly got into the referee’s book for a sharp foul on Salah. The pair of them were gradually turning their contest into a proper battle.

Two minutes inside the stoppage time, Milner lost the ball in midfield and Napoli tried to hit on the counterattack, but Trent and Van Dijk brilliantly took the ball off Mertens. The last attack before the break was Liverpool’s, but Napoli defended it well.

Liverpool opened the second period with two successive corners, before Wijnaldum tried to volley a Salah cross but only managed to send it high onto the Kop.

And in the 50th minute, Henderson did fantastically to win the ball 30 yards from Ospina’s goal and gave it to Firmino. The Brazilian put Salah through, and the goalscorer missed the near post by a hair’s with. After Mertens ruined a good opportunity at the other end, Mane threatened twice.

At this point, the ball was moving from one end of the pitch to the other, and all players seemed equally involved. Raul Albiol headed on target from a corner and made Alisson work a little, and Firmino did the same for Ospina at the other end less than a minute later. Even Van Dijk had a go, but his shot from 35 yards fizzed past the top corner. Insigne and Mertens combined nicely and Alisson had to come off his line to stop the Belgian. Then Henderson took a good shot from 25 yards, but Ospina made a fine save.

In the 62nd minute, Ancelotti decided to freshen up his midfield and sent on Piotr Zielinski for Fabian.

Zielinski hadn’t even started running before Milner suddenly cut through the Napoli lines and took a shot from a tight angle, just missing the far post. As Napoli went forward, Liverpool launched a counter and Maksimović was forced to stop Mane with a foul. No card was forthcoming for that.

Mertens made way for Arkadiusz Milik in the 67th minute as Ancelotti went for a different type of striker.

Ospina needed all his focus to save his team in the next minute as a long-range effort by Trent got a double deflection and started spinning towards the bottom corner. In the next couple of minutes, both Van Dijk and Matip had to be sharp to prevent Napoli from equalizing. Milik and Zielinski combined well in the 73rd minute but the Poland international’s shot from 12 yards went sky-high.

Then Liverpool hit with a lightning quick move and the visitors only just managed to save their skins, only thanks to Ospina.

Mane had another great chance with 15 minutes remaining as Firmino put him through, but Albiol managed to stop him with a great tackle. Ospina was next to thwart the Senegalese with a superb save from close range. Three minutes later the game could have changed completely when Insigne sent a trickling diagonal for Callejon, but Callejon couldn’t hit the target from six yards.

Then Klopp withdrew Firmino and sent on Naby Keita.

Wijnaldum came close with a header from Trent’s cross in the 82nd minute, and Keita had a shot blocked soon afterwards. Salah got a booking for preventing Ospina from releasing the ball quickly.

But the Italian team had a serious problem at this point. They were trying to play out from the back and move forward quickly, but Liverpool’s pressing was relentless and they couldn’t keep the ball under control. And if they did go long, there was very little Milik could do against Van Dijk and Matip.

Six minutes from time, Milner made way for Fabinho.

A minute later, the best chance of the game fell for Mane as Salah set him up for an open goal at six yards, but Mane somehow managed to hit the outside of the net from there. Then Insigne tried with a volley from the edge of the box, but couldn’t keep it low enough.

Then Trent, who had been complaining of an injury, left the pitch and was replaced by Dejan Lovren, and the four minutes of added time started running before Robertson picked up a booking for time wasting.

As a last resort, Ancelotti sent Koulibaly up front, but it was Milik who simply had to score. He ended up alone inside the six yards and controlled the ball well, before seeing his shot brilliantly saved by Alisson.

Alisson with one of the greatest saves. Worth every penny spent by Liverpool. ? pic.twitter.com/ajW0hJ3MWU

There was still time for Mane to embarrass himself once more. He broke through and charged completely free towards Ospina, before shooting just wide. But that was it.

Congratulations to Napoli, they fought really hard and some of their players put in great individual performances, but it simply wasn’t enough to stop this Liverpool team. Ospina was superb in goal and Koulibaly is by far their Man of the Match, but on the other hand, their formidable attacking trio totally misfired at Anfield. Insigne and Callejon weren’t nearly enough involved, and Mertens looked indisposed.

Maybe he should think twice before making thickheaded remarks in the future.

It was certainly an exciting match, one that could easily have gone either way, but there’s no disputing the fact that Liverpool were the better team and deservedly won. They won the day, they won the race, and they WILL be playing in this season’s Champions League round of 16. As far as this game is concerned, that’s all that matters.

In the other game of the group, Paris Saint-Germain did what neither Liverpool nor Napoli could – beat Red Star in Belgrade, by 1-4. The French champions finish on top, with the Reds just behind. Napoli move to the Europa League, and Red Star end their European journey here.

Next up – you know who. Bring it on. As for the Champions League…