In what was undoubtedly as a hugely important game for their hopes to clinch the ever illusive Premier League title, Liverpool welcomed Arsenal to Anfield in their last game of 2018.

Both teams have had a terrific season, comparatively. As the Reds’ march saw them achieve their best 19-game tally ever and sit top of the league, it has to be said that Arsenal have done a lot better than many had foreseen following the departure of Arsene Wenger after 22 years and the appointment of Unai Emery in his place. Prior to this round and their trip to Merseyside, the Gunners sat in fifth place with 38 points, six above Manchester United in sixth and just two below Chelsea in fourth.

Liverpool’s absentees are well-known by now. Alex Oxlade-Chamberlain has made some huge steps in his recovery and is now expected back to full training in February or March. Joe Gomez and Joel Matip are still out with lower left leg and collar bone fractures, respectively. James Milner was also out.

Unai Emery was without centre-backs Dinos Mavropanos, who is yet to play a competitive game for Arsenal, and Rob Holding who is out for a long time with an ACL injury. Fullbacks Hector Bellerin and Nacho Monreal were being assessed before the game, as was centre-back Shkodran Mustafi. Attacking midfielder Henrikh Mkhitaryan and forward Danny Welbeck are out for a long time too with a broken metatarsal and a broken ankle, respectively.

The Reds showed that they mean business right from the start. Within two minutes Robertson’s cross went just in front of Mane inside the six yards, and the Senegalese pressed Bernd Leno in Arsenal goal into sending what would have been an easy pass out of bounds.

Arsenal combined well in the fifth minute to enter Liverpool’s box, but Ramsey couldn’t keep the ball from going out for a goal-kick. Firmino tried his luck at the other end soon afterwards and Salah tried to redirect it cunningly, but it missed the target slightly. Mane had an early tussle with Lichtsteiner, claiming the fullback had tried to elbow him.

It was an incredibly fast game. Both teams looked to get forward in numbers as quickly as possible, but also to get back and defend in the same manner.

In the 10th minute, Iwobi beat Lovren with pace and took a shot from a tight angle, and Alisson made a fine save.

But a minute later, an accurate diagonal cross by Iwobi found the run of Maitland-Niles on the far post (which Robertson had failed to track) and the youngster reacted like a seasoned striker as he slotted past Alisson. 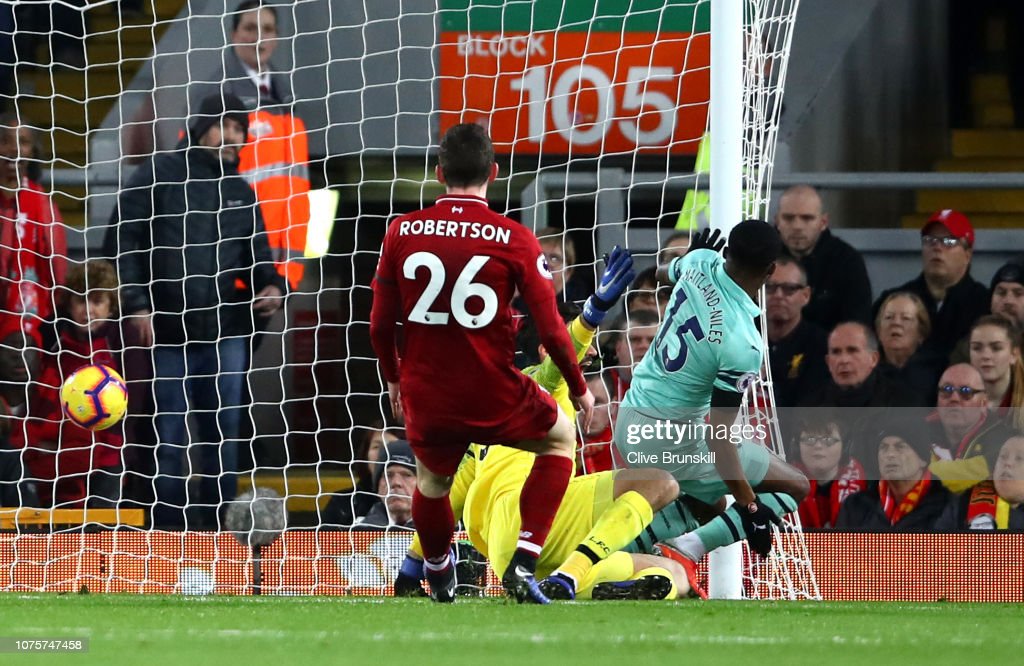 An early shock was clearly what Arsenal were going for, but the Reds weren’t going to let them have it all their own way. After 14 minutes, Firmino took the ball, carried it forward and employed Salah on the edge of the box. Xhaka made a good tackle to dispossess the Egyptian, but Lichtsteiner made a blunder of the loose ball, hit Mustafi in the back and enabled Firmino to pick up the pieces and slot into the empty net with a trademark “no-look” finish. 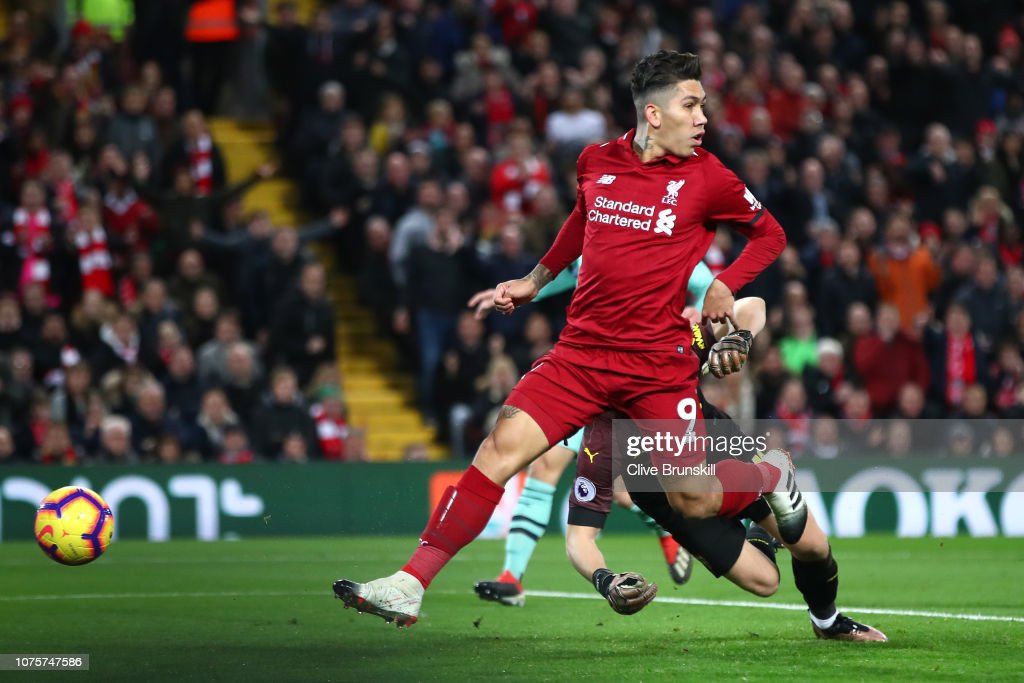 And the Brazilian wasn’t over with Arsenal just yet. It took him just another minute to turn the game around. Mane did very well to win the ball high up, before Firmino’s skill sent three defenders to three different parts of the world and he slammed it past Leno. 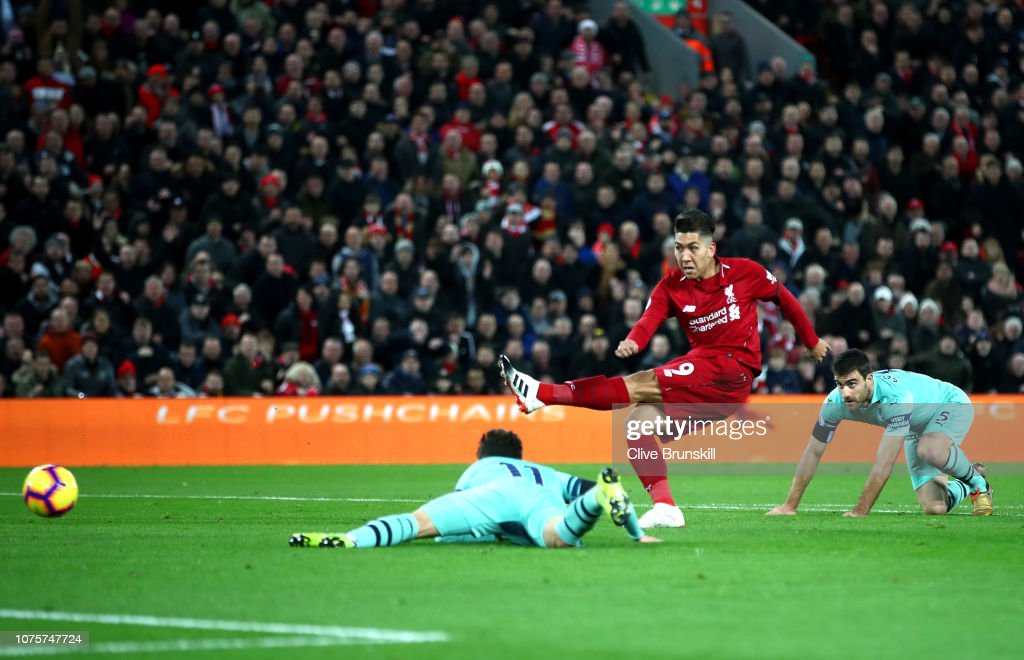 It was now Arsenal’s turn to try and hit back. They pushed forward immediately, and it took a brilliant tackle from Wijnaldum on Ramsey inside the box to save the day.

The game wasn’t losing much pace, but it seemed at this point that players of both teams started using their heads a bit more than early on. Eventually, it was Liverpool who decided to take the heat down a bit and try and keep possession for longer spells. Arsenal were still trying to play fast, but Liverpool’s organized defending made it very hard for them.

In the 23rd minute, Roberston and Mane beat Maitland-Niles and Lichtsteiner with a joint effort, but Mane’s subsequent shot ended up safely in the arms of Leno. Three minutes later, Robertson used his arms to stop the run of Maitland-Niles and earned a booking. Xhaka’s free-kick was well-aimed in behind Liverpool’s high line, but Ramsey was caught offside as Alisson saved his header.

As was the case in the first encounter between these teams this season, Arsenal were finding ways to trouble Liverpool more than other Premier League teams. They weren’t afraid to take the game to the hosts, combining cunningly and frequently switching sides with smart diagonals. This meant that both Maitland-Niles and Iwobi were much involved on the flanks, and both Trent and Robertson had much to do.

But at the back the Gunners did not look so confident. An awkward backpass from Sokratis made Leno clumsily concede a corner, and after it was cleared, Robertson’s long diagonal to the left was squared across the box by Salah for Mane who slammed it past the helpless Leno. 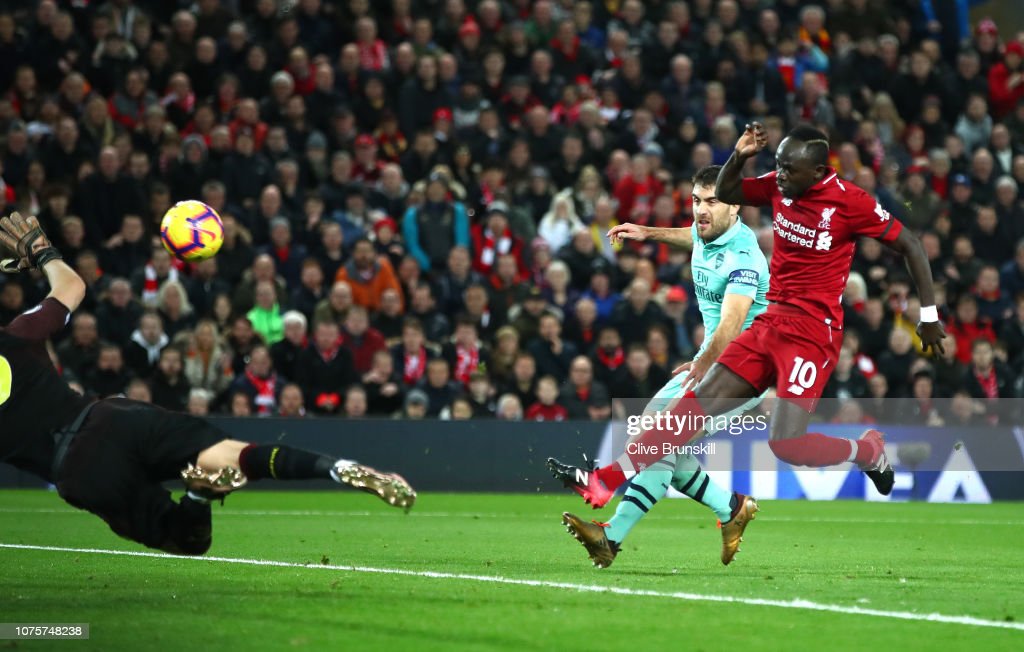 Frustration was already on the horizon for the Gunners, and Xhaka was lucky to escape with only a yellow card for a malicious tackle on Robertson. But they didn’t give up. They stuck to their plan and defiantly pushed forward.

The same can be said about Liverpool. Faced with a fierce opponent, they weren’t letting their guard down. Three goals in the Gunners’ net simply weren’t enough to make the game any tamer, and they were ready for it.

One area of the pitch where the visitors seemed to have the edge was their left flank. Trent was often marauding forward, and Lovren was forced to go wide and try and stop Iwobi. There, the Croatian would have trouble with the Nigerian’s pace, but he was always helped by one teammate or another.

Wijnaldum was making a lot of difference in the middle of the park. Arsenal’s pressing was perhaps relentless, but the Dutch midfielder was incredibly clever in performing typical Klopp-style counterpressing. Whenever his teammates lost the ball in their own half, he was there to recover it.

On the stroke of halftime, Salah entered the box and gave Sokratis the slip, forcing the Greece international to tackle him clumsily from behind and bring him down. Referee Michael Oliver blew his whistle and pointed to the spot.

Salah took it himself and gave Leno no chance. 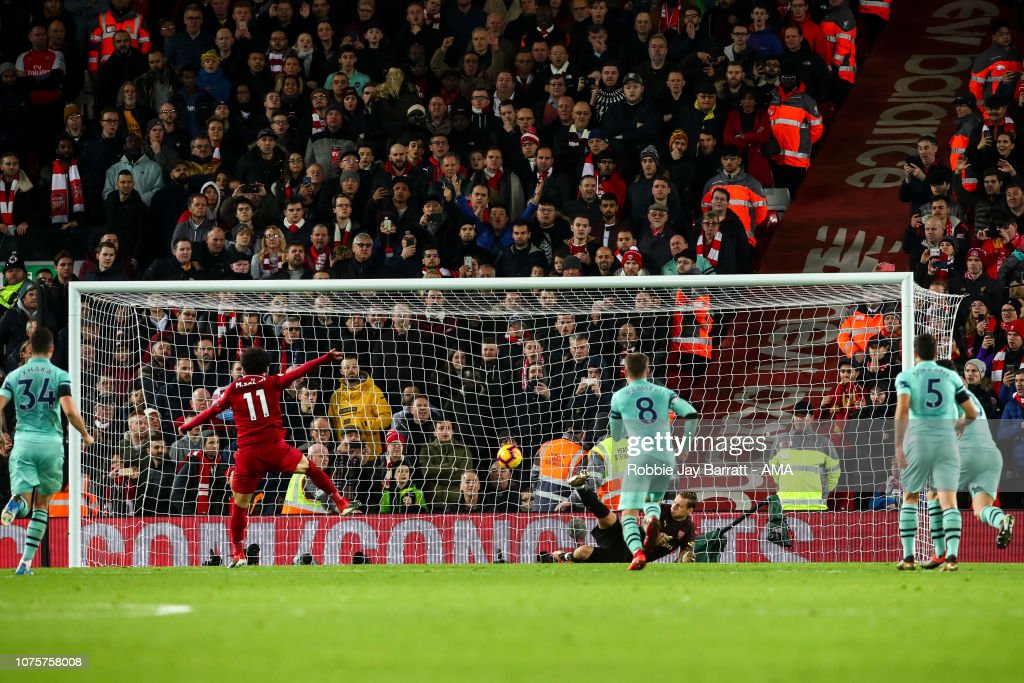 Laurent Koscielny had just returned from long-term injury after tearing his Achilles tendon last spring, and he came on from the second half instead of Mustafi and retook the captain’s armband.

Within two minutes, a cunning Liverpool move saw Mane get into the box and charge towards the goal, but Sokratis was more focused this time and did well to stop him. Just 60 seconds later Shaqiri set Salah up for a one on one with Leno, but the Egyptian miscontrolled it and enabled the Arsenal ‘keeper to take it from him.

The Reds were clearly going for a kill. They pushed the visitors hard and made them defend with everything they have, but they defended well and tried to attack as well.

In the 54th minute, they had a great chance as Xhaka’s pass released Ramsey inside the box. The Welshman’s shot got deflected off Fabinho and found Aubemeyang on the far post, but the Gabonese was now only unable to put it in, but he was also ruled offside.

But it was Liverpool who were producing dangerous moments more frequently. Several through-passes were stopped by the Arsenal defenders in the last moment, and Firmino had a powerful shot from 25 yards saved by Leno. It was simply easier for the Reds to get to the edge of the opposition box.

Around the hour-mark, Arsenal succeeded in spending a minute or two in Liverpool’s half, but there was no way past the Liverpool defence. In the 62nd minute, Anfield rose to applaud Sadio Mane who made way for Jordan Henderson.

A minute later, Salah’s sublime backheel flick allowed Fabinho to shoot unobstructed from just inside the box, but Leno made a fine save. But then, in the very next attack, Kolašinac inexplicably elbowed Lovren in the back inside his own box, leaving the referee in no doubt about giving another penalty. This time it was Firimino who stepped up. He sent Leno to one side, the ball to the other, and completed his hat-trick. 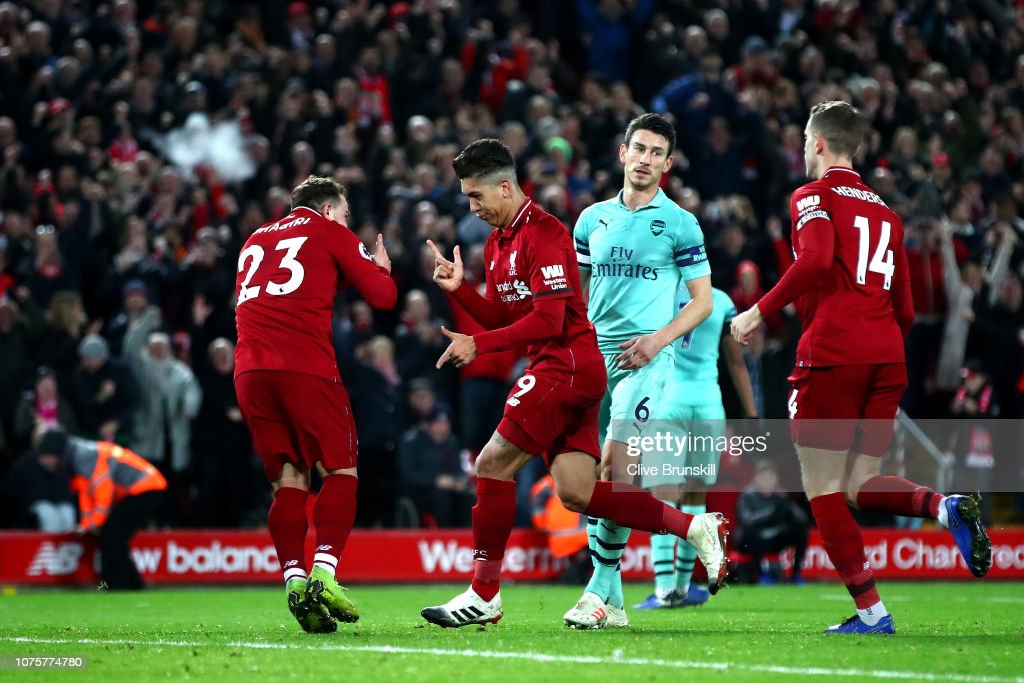 Well, it’s fair to say that the fifth goal slowed the game down. There wasn’t much tension anymore, and both teams seemed to be enjoying playing football a lot more than before; even Arsenal.

But Unai Emery certainly wasn’t happy. With 20 minutes to go, he replaced Aubameyang with Alexandre Lacazette.

Three minutes later, a swift run and a pullback by Iwobi down the left almost set up Lacazette for a glorious chance, but Alisson reacted well. At the other end, Shaqiri’s strong long-range effort made sure Leno stayed focused.

In the 77th minute, a clash with Fabinho left Torreira on the ground and brought the game to a halt, and Klopp took the opportunity to replace Wijnaldum with Adam Lallana. Two minutes later, Lacazette earned a corner for his team and Emery sent on Matteo Guendouzi to replace Kolašinac.

With seven minutes remaining, Robertson made a late tackle on Lichtsteiner, and as if he was thanking the referee for not showing him a yellow card for the second time in this game (which would’ve ruled him out of the visit to the Etihad in five days), Klopp took the Scotland international off and replaced him with Nathaniel Clyne.

Clyne’s first contribution to the game was a clumsy but slight contact with Lacazette inside the box and the French striker went down. However, Oliver wasn’t interested.

A minute from time, Trent set his captain up for a shot from just outside the box, but Henderson missed the bottom corner by a yard.

In the second of the three minutes of injury time, Lallana’s pass and Salah’s clever run beat Arsenal’s offside trap and the Egyptian was off down the right flank, but Leno had closed down the angle well, and that was the last noteworthy moment of the contest. 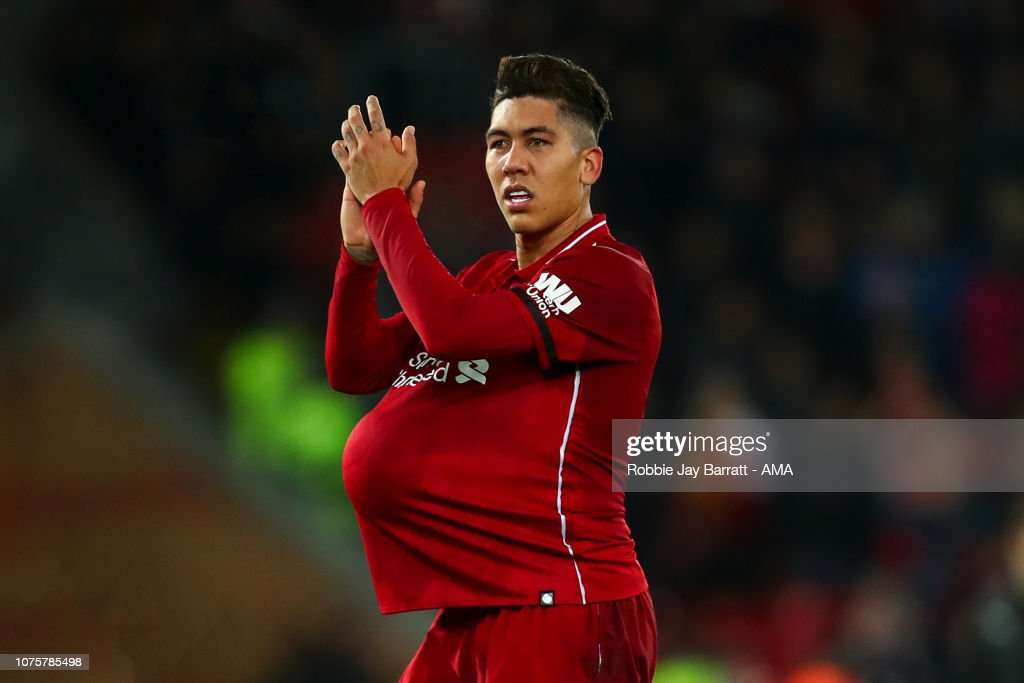 Firstly and most importantly, it’s a fantastic result. It had been five long years since Liverpool put five past Arsenal, and now it happened again, just as the Gunners were hoping to keep themselves in a good position for top-four placement. It also means that Liverpool’s lead at the top of the table has climbed to nine points after Spurs lost at home to Wolves, although Manchester City will have the chance to bring it down to seven by beating Southampton on Sunday.

That said, it’s also fair to say that Arsenal played much better than the scoreline suggests, and that the numerous individual mistakes of their defenders brought them such a thrashing. Emery will have a lot to say to them after this game.

But let’s each look after their own fortunes. Liverpool’s title push has been much strengthened this day, and that’s all that matters. It’s a great position, one that won’t be much different if the Reds lose at the Etihad, but also one that could deal a heavy blow to the champions if they win there again.

So next up – Manchester City. Bring it on.