So far so good. That was the general impression after 17 Premier League rounds, as the busy month of December slowly went by and Liverpool (with a little help from Chelsea) hopped over Manchester City and took up the top spot in the table.

The Reds traveled to Wolverhampton next, where they were to face the Wanderers at their Molineux Stadium. It’s fair to say that Wolves have been the surprise of the season so far, playing a very fresh, dynamic brand of football under manager Nuno Espirito Santo, as well as getting some amazing results. Prior to this game, only Tottenham Hotspur had managed to take all three points against them among the top six.

Alex Oxlade-Chamberlain, Joe Gomez and Joel Matip remain absent from the team, while the Wolves game came too soon for Trent Alexander-Arnold after the knock he picked up against Napoli. James Milner, however, was back. The versatile midfielder revealed that he had felt a slight pang in his hamstring after the Napoli game and Jurgen Klopp refused to risk him against Manchester United. This time, he was tasked with covering the right defensive flank.

It was also the 300th time skipper Jordan Henderson put on the Red shirt.

3️⃣0️⃣0️⃣ appearances for the Reds.

Espirito Santo was without the services of forward Diogo Jota, who had picked up a hamstring injury the previous week against Bournemouth and didn’t recover in time to face the Reds.

The game opened up as expected, with Liverpool pushing forward and Wolves waiting for their chance to hit quickly. However, the first exciting moment came extremely unexpected manner. Three minutes in, Fabinho misplaced a pass deep in Liverpool’s half and Moutinho pounced. He engaged Traore whose shot from just inside the box went wide of the near post.

Following that situation, the home side started pressing high up and tried to force Liverpool’s defensive players into a similar mistake, but the Reds would keep calm and play through, often coming near the opposition box. Wolves, however, defended resiliently and attack quickly again. In the 10th minute, Jimenez brought down a long pass near the halfway line and involved Traore, who was well marshaled by van Dijk and forced into a hasty shot off target.

Two minutes later, Milner took a corner at the other end and found van Dijk on the far post. The Dutchman sold a dummy to his marker and took a shot, only to see it blocked. Wolves responded quickly, with Coady switching play with a lovely long pass towards Doherty who then set up Saiss for a good chance, but Alisson produced a great save. Liverpool were dominating possession, but Wolves were the ones creating better chances and it wasn’t looking good.

In the 18th minute, however, Doherty escaped a card for a cynical foul on Keita, but his team weren’t as lucky. The free-kick eventually got Fabinho combining with Mane on the left and breaking through. He pulled it sharply back towards Salah at seven or eight yards, and the Egyptian made no mistake. 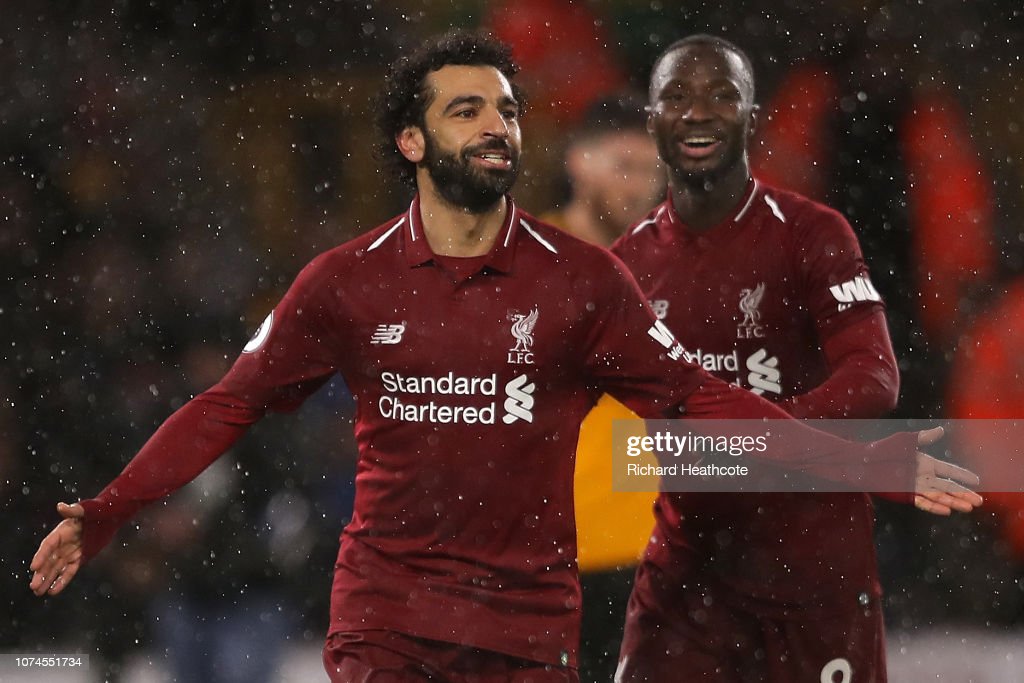 The goal seemed to have given wings to the Reds and they pushed their hosts far back for a while. In the 26th minute, a left-footed rocket by Milner shook Rui Patricio, but the Wolves ‘keeper was well positioned. Wolves again retaliated through Traore who escaped down the right, beat Lovren with quick feet and delivered a good cross to the far post, but under pressure from Robertson, Doherty could only head it tamely into Alisson’s hands.

The home side were showing a lot of intensity in their game, running a lot to close down spaces, but Liverpool were finding ways to get through and right to the edge of the box; but no further. There, Wolves kept it really tight and continuously thwarted Liverpool’s attacking efforts. Going forward, Espirito Santo’s men were mostly relying on Jimenez holding the ball up and Traore’s trickery, and they occasionally went forward in numbers, but it never lasted long.

They did have a good moment in the 38th minute as Saiss and Moutinho gave Milner a lot to worry about on the flank, but the move ended with Neves blasting it high over the bar. The next attack got Jonny Ccastro into a shooting position but Alisson was alert. The Brazilian ‘keeper then got himself in a typical spot of bother with Jimenez closing him down, but he luckily succeeded in keeping the ball.

But Wolves kept attacking and Jimenez had a good chance to shoot from 15 yards, but he took too much time and allowed Mane to close him down.

Lovren, who wasn’t having a very good game up that point, suddenly snapped out of it towards the end of the half and stopped Traore twice in a row with brilliant tackles. But Keita offered Wolves a great chance for an equalizer as he lost the ball to Doherty in his own half. The wing-back couldn’t beat Alisson with a strong drive from the edge of the box.

Both teams had a go in the dying seconds, but first Keita couldn’t get past Bennet, and then Moutinho failed to find the run of Traore as he overhit his pass.

Both teams came out fighting into the second period, and it was clear another tough 45 minutes awaited them all. High pressing, charging opposition down, forcing mistakes, it was all there as soon as the game restarted. The first chance came for Liverpool, as Mo Salah tamed a Milner corner on the edge of the box and volleyed it just wide of the far top corner. Then Fabinho gave the ball in his own half again but Robertson and Van Dijk stopped Traore in his tracks.

In the 52nd minute, a deflected Keita shot got Patricio confused and Salah almost took advantage, but the Wolves defenders reacted well. Two minutes later, a long Liverpool attack gave Milner a chance to shoot from 20 yards, but he couldn’t keep it on target.

Another two minutes later, Keita went down injured. He needed help to get up while holding his lower back, and Adam Lallana was sent on to replace the former RB Leipzig man.

Liverpool were now controlling the game. Tads of sloppiness were still there, but the cover provided for each player after a mistake was a pleasing sight. Wolves did still manage to start counterattacks on occasion, but it seemed Traore’s fire was burning out gradually, and Jimenez was a lot less involved than before the break. Then Espirito Santo reacted by taking Traore out and replacing him with Morgan Gibbs-White.

In the 67th minute, Salah combined nicely with Firmino before engaging Mane inside the box. The Senegalese then extended the pass for Lallana with a neat back-heel, but Lallana’s effort from close range was blocked. But there was no stopping Liverpool two minutes later.

Robertson swung in a cross, Saiss cleared it but only as far as Salah some 25 yards out on the right. Salah sent it back in and van Dijk got ahead of his marker and just cushioned it deftly into the net. 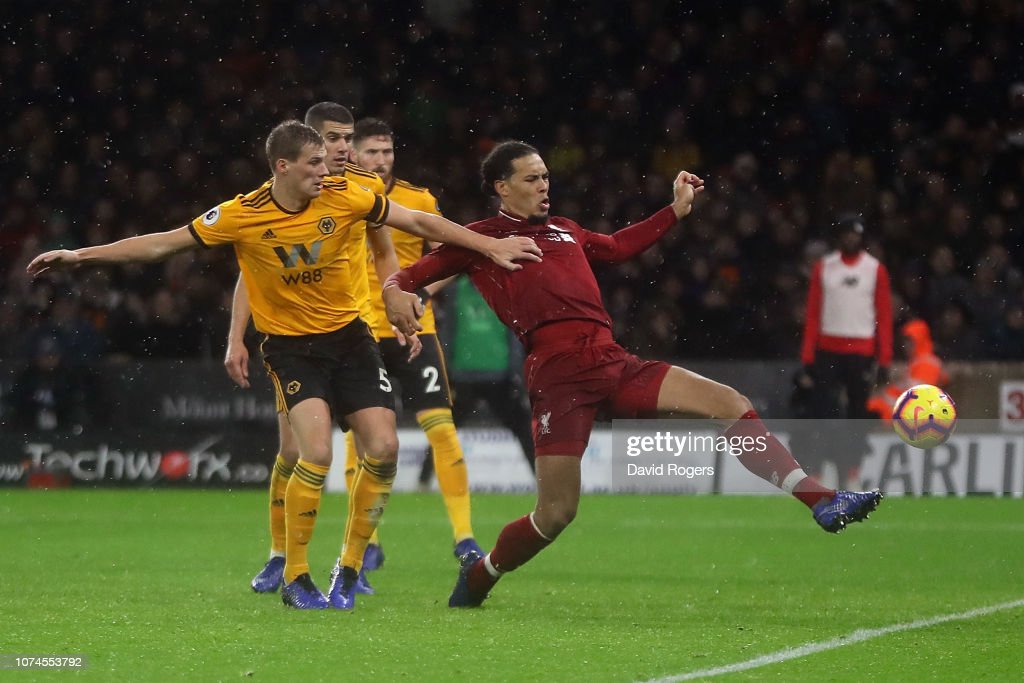 The second goal acted like a slap in the face of the home team and they woke up for a while. They earned a corner in the 72nd minute and a scramble ensued, resulting in a great opportunity for Saiss to score from close range, but Alisson was once again in the right place.

A few brilliant moves between Salah and Firmino caused the home team a few worries at that point, before Firmino made way for Georginio Wijnaldum. It was now a type of the 4-5-1 formation for Liverpool when off the ball, while that five-man midfield stretched to form a 4-2-3-1 when in possession.

With 13 minutes remaining, Neves whacked one from range and hit Milner. It was picked up by Henderson who brilliantly released Salah, but Egyptian was stopped by some good defensive work from Liverpool graduate and Wolves captain, Conor Coady.

The changes the Wolves manager made seemed to have been the right ones, and his team started attacking again.

But it almost came back to bite them in the 84th minute when Fabinho released Mane on the counterattack and Mane threaded a beautiful through pass for Salah, but Patricio closed down the angle and managed to stop him. Milner swung in the ensuing corner; Mane jumped highest and sent his header over the bar.

With 87 minutes gone, Mane made way for Nathaniel Clyne. Milner moved up to the right wing.

Two minutes later, Robertson made an inexplicable mistake and gave young Gibbs-White a chance which he really should have taken from six yards, but he only hit the outside of the net.

As the five minutes of injury time started running, a lovely pass by van Dijk enabled Salah to give Boly the slip, but Patricio once again came to his team’s rescue. The goalkeeper saved Boly’s skin again as the defender clumsily gave the ball to Salah in his own half, by charging out and stopping the Egyptian once more.

As if it wasn’t enough, Boly again lost the ball to Salah, this time inside the box wide on the right, and Salah pulled it back for the incoming Wijnaldum who smacked it just wide of the far post with what turned out to be the last kick of the game.

Another vital three points for the Reds in their stride to win the race for the so far elusive Premier League title, and the pressure is once again on Manchester City, who now need to beat Crystal Palace at the Etihad on Saturday in order to get back to a point behind Liverpool.

It was another of those “gritty” wins we’ve become familiar with this season. Wolves played really well for large portions of the game and the Reds occasionally looked very sloppy, but there was never really any doubt as to who the better team were. A hard-fought victory, but all the more deserved.

Next up, it’s Newcastle as Anfield welcomes one of its heroes – Rafa Benitez, and with that game, the first half of the Premier League season will be over; hopefully with Liverpool sitting on top.