Having suffered their first league defeat and crashed out of the FA Cup, Liverpool played their 22nd league game of the season against Brighton & Hove Albion at the Amex Stadium.

Despite those results, the Reds still sat top of the table coming into the round and were certain to stay there after it no matter what. But the string of defeats had to stop right there for their push for the first league title in almost three decades to remain as strong as possible.

The Seagulls were sitting on a comfortable ten-point cushion above the relegation zone, which is a very good situation for a team of their calibre (with all due respect) at this stage in the season.

Jurgen Klopp was still without Alex Oxlade-Chamberlain, Adam Lallana, Dejan Lovren and Joe Gomez. Joel Matip recovered from a broken collar bone, but he wasn’t to be risked without need and found himself on the bench. Fabinho took the place alongside Virgil van Dijk at the back. It was a 4-2-3-1 shape, with Jordan Henderson and Georginio Wijnaldum sitting ahead of the back four and Roberto Firmino playing behind Mo Salah, flanked by Xherdan Shaqiri and Sadio Mane.

Brighton manager Chris Hughton was without Bernardo (hamstring) and Jose Izquierdo (knee), while Alireza Jahanbakhsh and Mathew Ryan left the side to go and compete in the AFC Asian Cup.

As expected, the Reds took possession of the ball and pushed forward early. But after their first penetration into the box had been repelled by the Brighton defence, a mistake by Henderson gave the home side a chance to attack on the counter and it was Liverpool’s turn to defend well.

Brighton’s shape was an extremely compact 4-5-1, making it very hard for Liverpool to move forward quickly. They tried to go long in the eight minute as van Dijk sent a long pass forward into the box for Shaqiri to chase, but Button was quick off his line.

A diagonal switch from Fabinho to Robertson a minute later enabled the left-back to square the ball in, but neither Mane nor Firmino managed to get to the end of it.

But the moment did liven the game up a bit. The Reds were suddenly finding it easier to play past their opponents, and they got into a couple of promising situations straight afterwards which had the Seagulls defending with a note of panic.

It wasn’t as if Hughton’s men were about to give up, however. They had attacking ideas of their own, and they also deployed a couple of smart diagonal switches to get into advanced positions, and one such move after 15 minutes saw a cross find the head of Glenn Murray inside the box, but the striker failed to hit anywhere near the target.

Three minutes later, Solly March caught Robertson with a late tackle on the left and Shaqiri whipped in the free-kick, but Brighton defended it well.

Liverpool slowly pushed the play into Brighton’s half at this point again and their attacks intensified. In the 27th minute, Mane did very well to get between the lines and switch play from left to right and employ Trent, who brilliantly delivered a left-footed cross to the head of Shaqiri, but the former Stoke City winger just missed the target. Two minutes later, Mane claimed he had been fouled inside the box but referee Kevin Friend wouldn’t hear of it.

The Reds kept turning the screw as time went on, and in the 34th minute Mane had a good run past several opponents, played a one-two with Salah before whipping in a cross from the left. Henderson dove for it and saw his header blocked. There wasn’t much they were doing wrong, but Brighton stood resolute.

Three minutes later it was Robertson who made a good run down the left and left Montoya for dead, but he was brought down on the edge of the box from behind by the back-tracking Pascal Gross. It was a strange decision by the referee, standing close, not to give a foul.

Liverpool continued pushing for a breakthrough in the final five minutes of the half, but they couldn’t produce one.

After an initial 60 seconds of sloppy play from both teams, Brighton threatened seriously as Gross cushioned a long pass towards March inside the box, but March was to slow to capitalize. Salah hit back straight away as he broke down the left flank and took a strong low shot, but Button produced a fine save.

Nonetheless, Salah quickly got over it as he entered the box, took on Gross and beat him, prompting the Brighton midfielder to bring him down from behind. This time Friend blew his whistle and pointed to the spot. The Egyptian took it himself and there was nothing Button could do now. 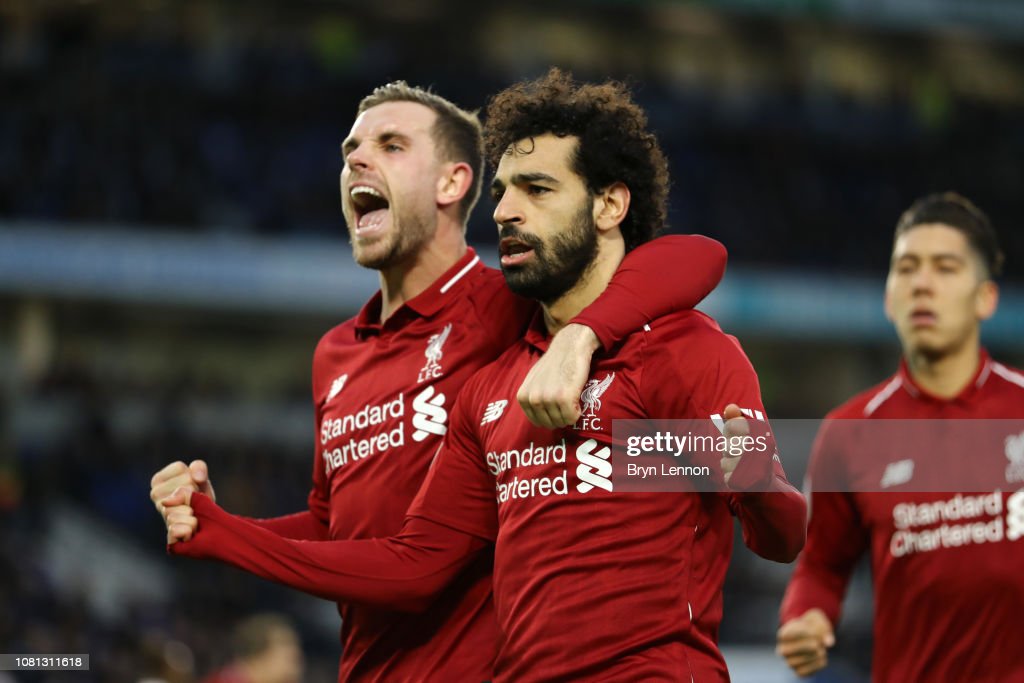 The game changed completely as the deadlock broke. Liverpool were now completely in control, keeping the ball with ease and new-found patience. They were making space wherever they needed for it, and it became very easy to get into promising positions. All Brighton could do was strap in and defend as well as they are able.

But in the 58th minute, Liverpool’s focus seemed to have wavered a little and the home team pounced. They created a great chance as the ball reached Gross near the penalty spot and he blasted it goalwards, but Fabinho stepped into the path of the shot and blocked it. They followed that up with another attack which Stephens selfishly ended with a 40-yard effort miles off target. But they were slowly growing back into the game.

Henderson was proving very important in this period. The captain won the ball in a few situations when it could have turned into all sorts of trouble had Brighton got away with it, and produced several very intelligent passes to sway the flow of the game the other way.

In the 66th minute, Hughton made a double change. Murray and March made way for Florin Andone and Anthony Knockaert.

As the Seagulls pushed forward looking for an equalizer, Icardia had a go from very long range but he was never going to beat Alisson from there. Liverpool soon tried to hit quickly through Salah on the right, but Bong did well to stop him before he needlessly gave the ball away, and the Reds went forward again.

With 71 minutes gone, Shaqiri made way for James Milner.

Liverpool had a good opportunity soon afterwards as Stephens brought down Mane wide on the right. Trent whipped it in and Dunk was forced to produce some last-ditch defending to prevent Mane from scoring from close range.

A minute later, Salah ran through the middle and gave the ball to Firmino just outside the box, and the Brazilian hit it strong, but straight at Button.

A period of some very quick football followed. Both teams looked to play directly and get the ball as far up as quickly as possible. In the 80th minute, Brighton cleared a Salah corner but only as far as Robertson, who sent a fine diagonal for Salah on the right. The Egyptian showed superb skill in controlling it, played a one-two with Firmino before leaving it on the edge of the box for Wijnaldum to shoot. The Dutchman’s shot had Button at full stretch and trickled just wide.

Brighton prepared to make a last effort in the closing stage of the game, but in the 87th minute Salah did well to keep the ball in their half under pressure and released the run of Mane, who was stopped by the Brighton defence in the last moment.

Less than 60 seconds later, Salah managed to miss what was arguably a better chance than the penalty he had scored. Milner set him up, completely unobstructed on the edge of six yards, with Button already going down, but Salah mishit the shot and sent the ball harmlessly out for a goal-kick.

Just as the 90 minutes were up, Naby Keita stepped off the bench to replace Mane.

Then Brighton really pushed for it. In the second of the four-minute stoppage time, Knockaert got in behind van Dijk and darted to the right, then squared it for the incoming Locardia on the far post, but Trent was there to make a hugely important interception.

As his last move of the game, Klopp sent on Divock Origi for Salah in the 94th minute.

The referee decided to allow 60 seconds more, but Duffy wasted Brighton’s last opportunity to get the ball forward with a needless handball.

Brighton made it difficult for Klopp and his men, as was always going to be the case. They won’t be having any regrets in terms of the effort they put in to stop the Reds, and will maybe look back on the one moment when Gross probably should have done better in his own box and not allow Salah to get goalside of him.

On the other hand, taking advantage of one such moment to win the game is what makes the difference between good teams and the top ones. These three points now take the Reds to a seven-point lead ahead of Manchester City again, though Guardiola’s team have a game in hand which they play on Monday evening, at the Etihad, against Wolverhampton Wanderers.

As for Liverpool, it’s Crystal Palace at Anfield on Saturday next.