Liverpool welcomed Leicester City to Anfield in what could yet prove a crucial moment of the Premier League season. It was the 24th game of the campaign for the two teams, with the Reds looking to take advantage of title rivals Manchester City taking a slap across the face at the north-east. Newcastle United, led by the great Rafa Benitez, had stunned the defending champions, and gave their manager’s former club a chance to extend their lead in the table to seven points.

Jurgen Klopp was given a proper scare following the team’s training camp in Dubai with Virgil van Dijk and Fabinho both struck down with illness, but both recovered in time, though Fabinho only made the bench. Dejan Lovren and Georginio Wijnaldum were also back to full fitness following a hamstring and knee problem, respectively. Trent Alexander-Arnold, on the other hand, did not recover in time for this game despite Klopp saying his rehabilitation was going well. The same goes for Joe Gomez following the leg-break he suffered in December, along with Alex Oxlade-Chamberlain whose return isn’t expected at least for another month. James Milner was suspended following his two yellow cards against Crystal Palace in the previous round.

It was an interesting setup at the back for Liverpool, with captain Jordan Henderson at right-back.

Leicester boss Claude Puel wasn’t able to count on midfielder Daniel Amartey, who has been out for a while with an ankle injury. Centre-back Harry Maguire suffered a knock the previous week against Wolverhampton Wanderers, but he was fit in time to make the Anfield trip.

Liverpool dominated possession from the start. They controlled the ball well and moved it around, before Mane combined well with Robertson and Firmino in the second minute and slotted past Schmeichel from just inside the box. 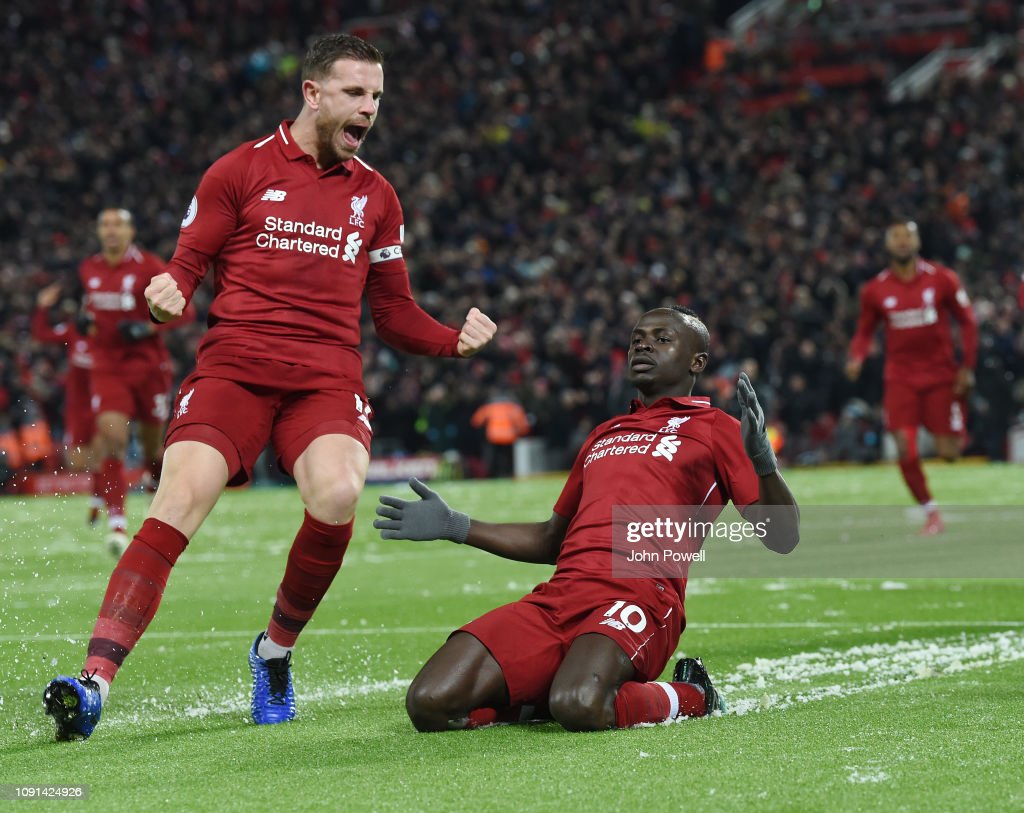 Leicester were thus forced to change their approach and push forward more, leaving considerable space behind for Liverpool to exploit. Not long after the opener, Salah found himself with room to manoeuvre and lobbed a good diagonal into the box for Firmino. The Brazilian beat his marker and took a low shot from a tight angle, but Schmeichel managed to turn it round the far post and out for a corner from which Mane hit a free header wide.

There was a nervy moment at the other end as Alisson gave the ball dangerously away, but Henderson’s slight touch prompted Maddison into a dive which referee Martin Atkinson fortunately saw right through. It was to be expected Leicester would be targeting Henderson in an unfamiliar role, but the captain held his own.

Liverpool continued going forward and trying to push the opposition back, but the Foxes were putting in a serious effort to fight back and a tough battle was developing in the middle of the pitch. The double pivot of Keita and Wijnaldum was working well, but so was the duo of Mendy and Ndidi. Maddison and Albrighton provided much help on one side, Firmino and Mane did the same on the other.

In the 16th minute, a careless pass by Henderson allowed Vardy to have a run at Matip, and the Cameroonian was forced to take him out and pick up a booking. Leicester were gradually winning ground and the Reds dropped back, until it got to the point where the visitors would hold the ball unchallenged in Liverpool’s half. It didn’t, however, take Liverpool long to get on the front foot again and calm things down.

With 23 minutes gone, Salah turned around Chilwell nicely and tried to employ Shaqiri inside the box, but Ricardo defended very well. A minute later, Alisson got extremely lucky again as he allowed himself to get blocked by Vardy and the rebound went wide towards Albrighton whose cross found Maddison unmarked on the edge of six yards, but Maddison’s header went inexplicably wide. Then Salah beat two opponents to get into the box, but there he was surrounded by several more and was forced to concede the ball.

On the half-hour mark, Wijnaldum got dispossessed in the middle of the pitch and Ndidi sent Gray running down the left flank. The winger aimed for Vardy on the penalty spot but van Dijk stepped in and cleared it out. Liverpool struck back immediately but the Foxes’ defence did well against the combination of Firmino and Robertson on the left. The lively fire exchange lasted a bit longer with both teams looking to cause damage, but the score remained unchanged.

In the 38th minute, Salah had a run at Chilwell and Maguire but the strong centre-back stood his ground and bumped into him. The Egyptian went down but Atkinson wasn’t interested.

That call might have been a right one, but two minutes later Robertson followed up on a fantastic run from the back with a fabulous through pass for Mane, and Maguire, acting as the last man of defence, pulled the Senegalese down. Atkinson gave the foul, but the colour of the card he raised was, surprisingly, yellow. 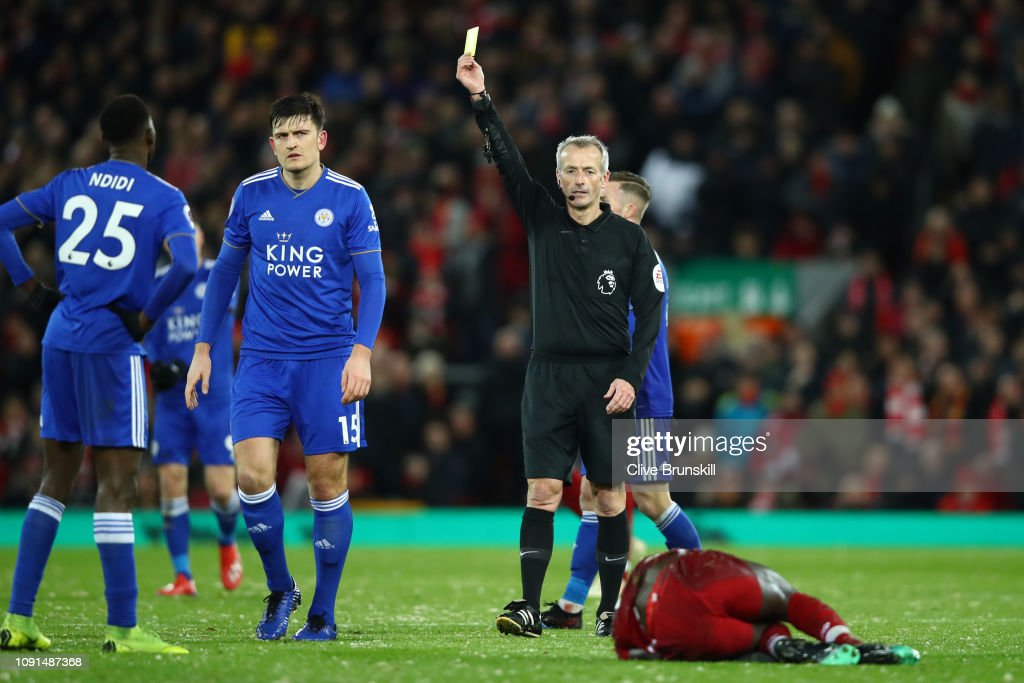 Towards the end of the half, Alisson made amends for his earlier blunders with several alert reactions which thwarted potentially dangerous counterattacks.

However, right on the stroke of halftime, Robertson needlessly gave away a free-kick wide on his flank, and Maddison swung it in. Liverpool only half cleared it, giving Chilwell an opportunity to head it back in behind where Maguire cleverly avoided an offside position and slotted past Alisson from close range. 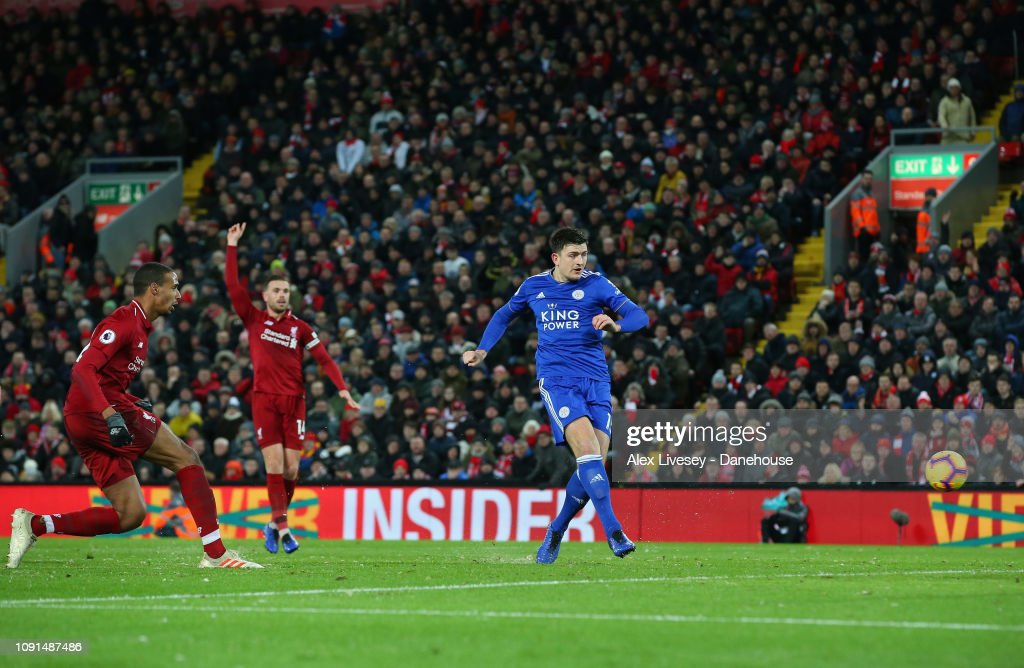 Really poor way to end the half from #LFC, with Harry Maguire equalising in injury time following a needless foul and the free-kick not being dealt with. Hosts started aggressively on an icy, difficult surface, but dropped off and have made a few sloppy mistakes.#LFC 1-1 #LCFC

The game continued after the break in the same manner a lot of the first half had been going, with Liverpool seeing more of the ball and Leicester looking very compact and energetic. However, in the 50th minute a combination between Gray, Chilwell and Maddison wreaked havoc inside Liverpool’s box and it was a very dangerous few seconds before Matip finally cleared it. A minute later Ricardo picked up a yellow card for stopping Mane in his tracks, but then Keita gave away a foul in the same position as Robertson prior to the equalizer.

It was taken towards the far post from where Maguire returned it across the six-yard box. Firmino dove in front of Evans and almost put it in his own net, but Alisson displayed incredible reflexes to spare his compatriot some blushes.

The Reds brushed the moment off and continued in the same way as before, and on 57 minutes Keita ran towards the box and played a one-two with Firmino before getting obviously clipped from behind by Ricardo. Atkinson, however, once again refused to give a penalty.

That's a nailed on penalty. Horrendous from Atkinson #LFC

The moment clearly had an impact on the focus of Liverpool players and the Foxes tried to take advantage by moving forward quickly in the next several minutes, but they couldn’t create anything noteworthy. They did, however, start pressing high and making it difficult for the Reds to play out of their half. That did produce results, and they got forward in numbers on several occasions.

But it was Atkinson who kept proving Liverpool’s biggest enemy in this game. Just over an hour had gone when he first refused to give an obvious foul on Shaqiri 25 yards from Schmeichel’s goal, then on Wijnaldum a bit further, and just as Henderson picked the ball up and Salah made a run into space in behind, he pulled the play back for the foul on Wijnaldum. Utterly poor piece of refereeing.

In the 67th minute, Klopp withdrew Keita and Shaqiri and replaced them with Adam Lallana and Fabinho.

Five minutes later, Ndidi threw Mane down from behind to stop a dangerous attack, and Atkinson did not waste a chance to disappoint again by not booking the Leicester midfielder. The Foxes soon hit on a counterattack which Gray wasted with a poor shot straight at Alisson as Vardy was making a run to the far post. Then it was Firmino who wriggled past a few defenders inside the box at the other end and took a shot but Schmeichel made a fine save. A corner followed from which Matip headed wide.

Then it was Puel’s turn to react, and he sent on Hamza Choudhury for Maddison.

Not much changed as time slowly passed, with Liverpool looking for a gap in Leicester’s stubborn defensive wall and the visitors making sure they couldn’t find one. Smart diagonal switches, clever one-two combinations, well-timed runs and nicely weighed crosses; the Foxes dealt with it all.

With 10 minutes to go, Ricardo pushed Salah from behind and gave away a free-kick around 25 yards out in a position favorable for a right-footed player, but it was still Salah who took it with his left and hit the wall.

Then Firmino made way for Daniel Sturridge, followed by Shinji Okazaki coming on for Gray.

In the 85th minute, Albrighton sent a long ball in behind the Reds’ defence for Vardy to chase, but Alisson was out in time right before Sturridge wasted a favorable moment at the other end with a clumsy handball.

As Leicester went forward to see if they can win this game, Matip made an interception and Mane took the ball and ran forward, but the fresh legs of Choudhury caught up and poked it away from him at a crucial moment. Sturridge followed that up with a very inaccurate shot from range.

In the last minute of the 90, Vardy slowly made his way towards the bench. Kelechi Iheanacho came on.

Liverpool gave their all during the four minutes of stoppage time. Wijnaldum sent Lallana through and Lallana pulled it back towards Salah on the edge of six yards, but Leicester intercepted it. Chilwell cleared a dangerous cross by Robertson. Mane headed over the bar from a corner. Chilwell picked up a booking for time-wasting.

In the end, Leicester cleared a ball launched into the box by van Dijk, and the final whistle sounded loud.

The immediate reaction is certainly disappointment. It was a good chance to put some miles between the Reds and Manchester City in second place, and now it’s gone. Mane said the other day that the team are yet to hit top gear, and this game obviously didn’t do it for them. They were not bad, especially given the conditions (very cold weather, slippery pitch in places touched by snow) but the result is not what they wanted, what they needed.

Moaning about refereeing decisions is never any good, but Atkinson was indisputably the worst performer on the night. Let’s just leave it at that, without going into details.

On the other hand, Puel’s team should be given credit. They were relentless throughout, kept the pitch narrow and the spaces tight, never complicating on the ball too much. In fact, looking at their line-up, it is a quality side that would be likely to give any opposition problems. It is a side that beat Manchester City a month ago.

Yet, the gap behind Liverpool has increased, if less than hoped, and there is still a very long way to go.

Next up, it’s West Ham at the London Stadium on Monday.