Having bounced back from a two-game losing streak by beating Brighton and Hove Albion, Liverpool welcomed Crystal Palace to Anfield on Saturday, January 19th, in what was to be a part of the 23rd round of the 2018/19 Premier League season. The Reds were looking to put seven points between themselves and second-place Manchester City once again, before the title holders played their game away to Huddersfield the next day.

The spirits at the Red camp were raised by Trent Alexander-Arnold signing a new deal on the very matchday, following the same development with Andy Robertson two days before.

However, the 20-year-old Scouser was still sidelined with injury and unavailable to face the Eagles, despite the boss not ruling him out beforehand, and the versatility of James Milner was called into action again as the vice-captain slotted in his place.

Alex Oxlade-Chamberlain’s recovery is going very well at the moment, and he’s set to return to training towards the end of next month. If that happens, as the boss said, we might see him make a few appearances this season against all odds.

Adam Lallana and Joel Matip were back from injury, while Gini Wijnaldum, Dejan Lovren and Joe Gomez remained out.

Former Reds’ boss Roy Hodgson was without the services of his first and second-choice goalkeepers, Vicente Guaita and Wayne Hennessey, which meant that 39-year-old Julien Speroni was about to appear in a competitive game for the first time this season. It would be his 404th appearance overall for Crystal Palace, as he became the oldest player to play in the Premier League this season.

Striker Christian Benteke, who scored 10 goals for Liverpool in 2015/16, was back from injury last week and had made a substitute appearance the Palace’s home defeat to Watford in the previous round. He was on the bench once more.

Liverpool pushed forward hard straight away, not allowing Palace to get over the halfway line for long, long spells, and it took them just over seven minutes to create their first chance. The visitors had just cleared a corner and Milner picked the ball up, spotting Matip in a good position and threaded a lovely pass in behind for the centre-back, who acted like a proper striker the way he made the run, but Speroni was out in time, cut the angle and made a fine save. Three minutes later, Keita spotted the run of Mane and tried to employ him, but Sakho did well defensively.

Klopp had arranged his men in a 4-2-3-1, with Fabinho and Henderson sitting deep, Mane on the right, Keita on the left and Firmino behind Salah.

After a quarter of an hour, Palace managed to start a few attacks themselves, but they still couldn’t get anywhere near the opposition box.

Matip was very good at what he usually does – carrying the ball forward, almost to the edge of the box and trying to make something happen. He also picked out the run of Robertson with lovely diagonals a few times, giving him opportunities to square it into the box.

Around 20 minutes in, Mo Salah gave a glimpse of his magic as he wriggled past several defenders and charged into the box, but they somehow managed to crowd him out. Mane hit the target with a header after a corner, but Speroni was alert.

Three minutes later, Palace broke down the left and Zaha delivered a dangerous cross, but Ayew couldn’t reach it. The Reds hit on the counter with Salah wonderfully employing Keita and the Guinean running with it far up the pitch, before Tomkins stopped him with a brave tackle.

Palace tried to push the action as far towards the Liverpool goal as they could, mostly looking for Zaha to keep the ball in the opposition half, but it wasn’t working very well against the relentless proactive defending from the Reds.

In the 28th minute, brilliant movement from Salah allowed Henderson to employ Milner in some space on the right flank. Milner arrived almost to the edge of six yards at a tight angle and tried to square it, but Palace defended well. Soon afterwards, Matip headed goalwards from a corner but failed to hit the target under pressure from Kouyate.

Four minutes later, Milner was fouled wide on the right. Henderson swung in the cross and found van Dijk in the air, but the Dutchman only managed to earn a corner for his team. A minute later, Townsend got away with a deliberate handball in his own box, and give his team the lead in their next attack.

Zaha broke down the left, beat Milner with skill and pulled it back for Townsend who slammed it past Alisson from around 10 yards, with Fabinho a split-second too late in tracking his run. 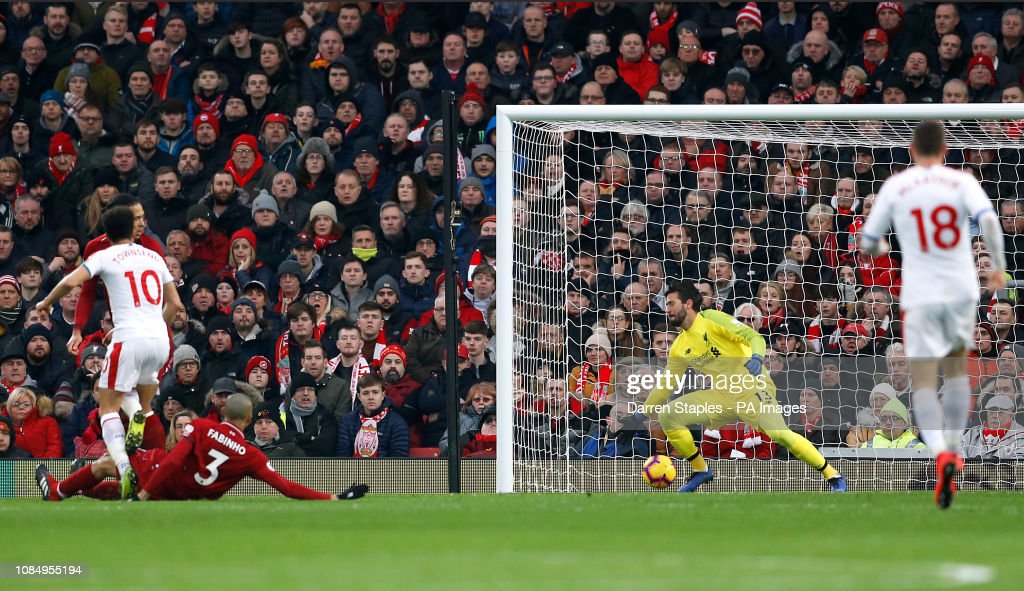 The Reds charged forward looking to respond as soon as possible, and two minutes later a nice cross by Robertson found van Dijk in the air again, but this time the centre-back couldn’t hit the target. Soon afterwards, Salah went down inside the box under little pressure from Sakho and and had to face some aggressive behaviour from Milivojević and Kouyate, with Moss giving them all a mild talking-to.

With five minutes of the half remaining, Ayew picked up a booking for a needless late challenge on Henderson.

Liverpool kept attacking from all sides, often confusing their opposition with the variety of their moves, but they just couldn’t produce an equalizer.

However, it took Salah just over 50 seconds to get one after the break. Palace defended the opening attack rather questionably but it looked as if they would get away with it. Then van Dijk picked it up and tried his luck from long range. His shot hit McCarthy and fell behind their defence, with Salah ready to pounce. 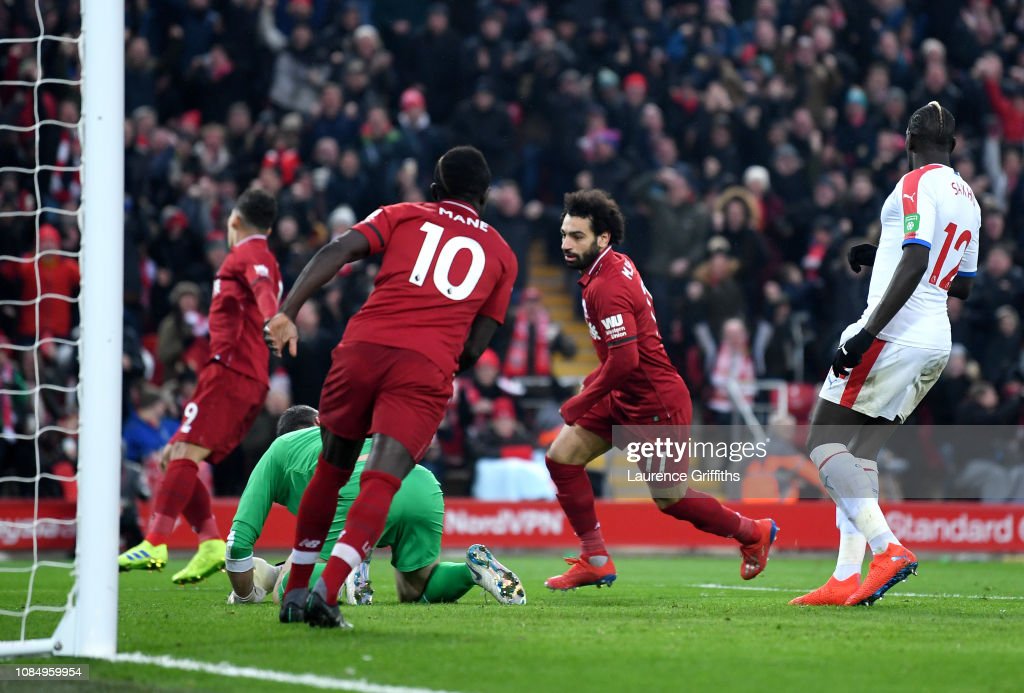 Three minutes later Robertson echoed the change in the atmosphere in the stadium as he charged up the pitch and took a shot from 20 yards, just missing the target.

The visitors tried a few counterattacks at this point but they were no match for the Reds who displayed some sublime defending, especially Matip and Henderson.

And in the 53rd minute, the scoreline was turned completely around. Keita gave the ball to Firmino inside the box, Firmino turned and fired, and a kind deflection of either Tomkins or Kouyate took it beyond the reach of Speroni and into the bottom corner. 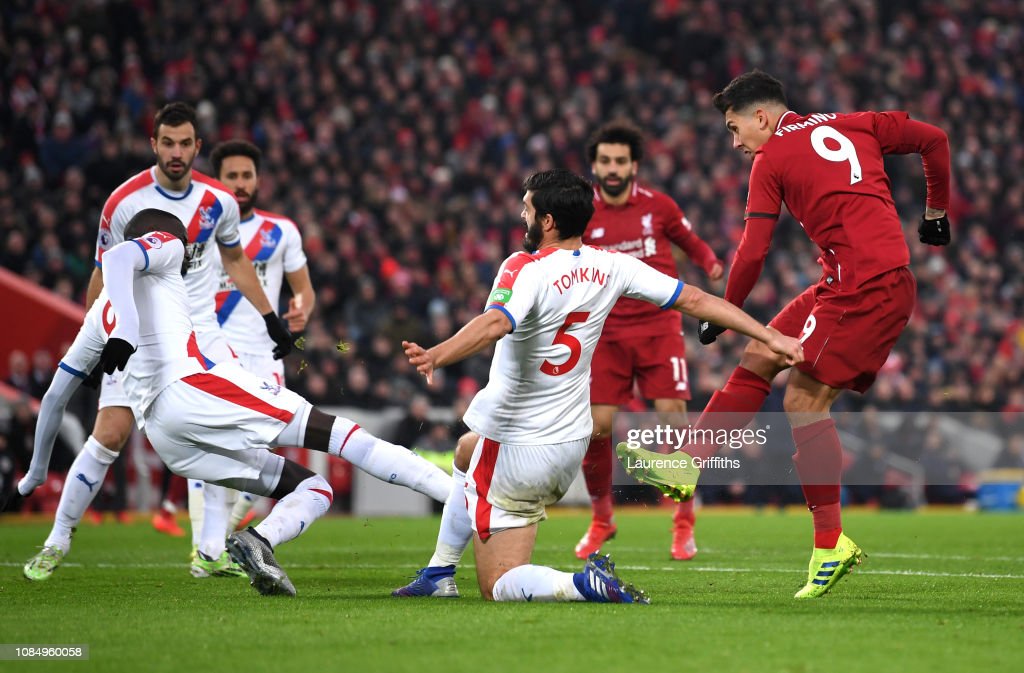 Liverpool continued their pressure, but Palace hit dangerously on the counter in the 62nd minute as Zaha broke down the left and squared it again, but Mane had thankfully backtracked quickly enough to stop Townsend this time together with Matip.

The Cameroonian was called into action again three minutes later as he stopped the run of Ayew inside the box and cleared it out for a corner.

But the whole defence failed a few seconds later. The corner was taken well towards the far post, where an obviously well-rehearsed move by the visitors allowed Tomkins to rise above all to slam a header into the net. 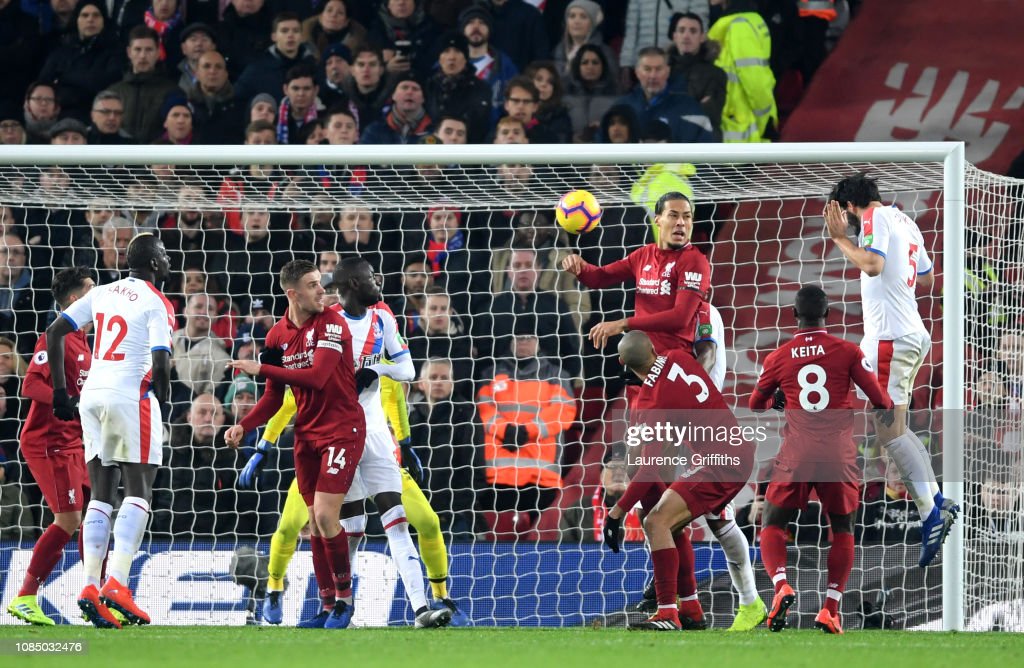 It was certainly a cold shower, but Liverpool weren’t allowing this unexpected development to get them down. They pushed forward as resolutely as before, and had the visitors hanging on for their lives and looking for an opening to hit on the counter.

In the 72nd minute, Xherdan Shaqiri entered the fray in the place of Keita.

Three minutes later, Fabinho sent a lovely diagonal towards the run of Milner on the right flank, Milner squared it across the six yards, Speroni came for it and made a spectacular blunder, and Mo Salah got in front of Tomkins to nudge it in. 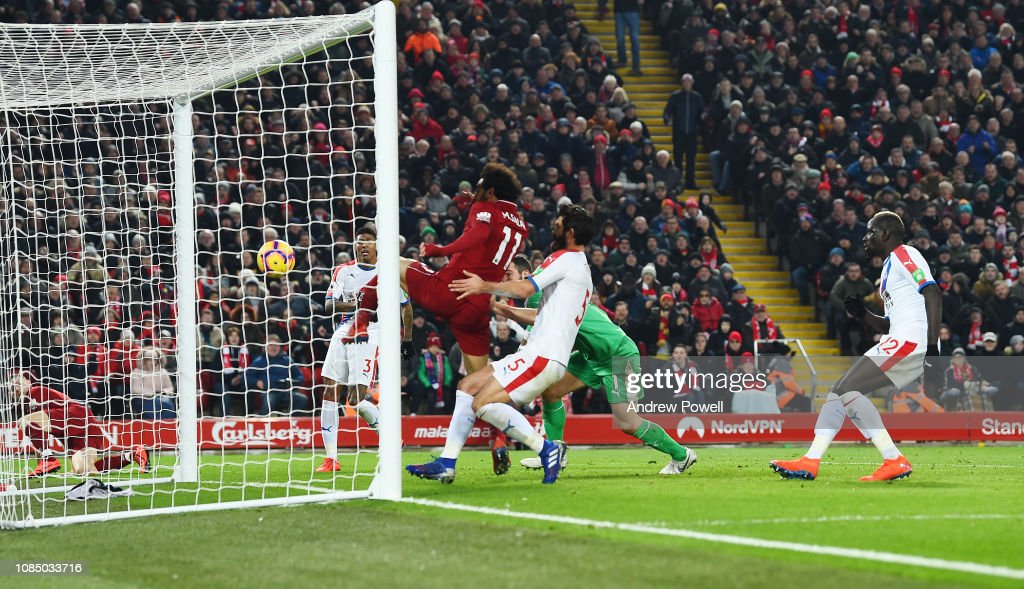 Hodgson’s reaction was to replace Kouyate with Jeffrey Schlupp.

It was the Eagles’ turn to try and spice the game up, and Zaha and Townsend sprang into life again. With 10 minutes on the clock, Ayew and McArthur made way for Conor Wickham and Max Meyer.

Having defended a corner, the Reds tried to hit quickly, but it ended with Mane taking a tame effort which was an easy catch for Speroni. Less then a minute later, Milner took out Zaha with a late tackle and earned a yellow card. Van Aanholt swung it in and Schlupp almost made the score level again, but he couldn’t hit the target.

Salah caught Sakho at unawares soon afterwards and charged into the box, but eventually ran into a crowd.

In the 86th minute, Fabinho went down injured and had to make way for Adam Lallana.

Palace attacked dangerously straight away but van Dijk stopped them with an immaculate tackle.

A minute and a half later, Milner was late on Zaha again and got his marching orders. There could be no complaints about Moss’ decision this time.

Mane had a great chance to kill the game off straight afterwards as the Reds defended the free-kick well and Salah released the Senegalese on the counterattack. Mane charged forward, fought off the challenge of Townsend and took a shot from the edge of the box, but failed to hit the target as the game entered its five-minute stoppage time.

But a minute later – he did it.

Having combined with Robertson on the left, Mane charged past Wan-Bissaka, entered the box and hit it low, past Speroni and into the far corner. 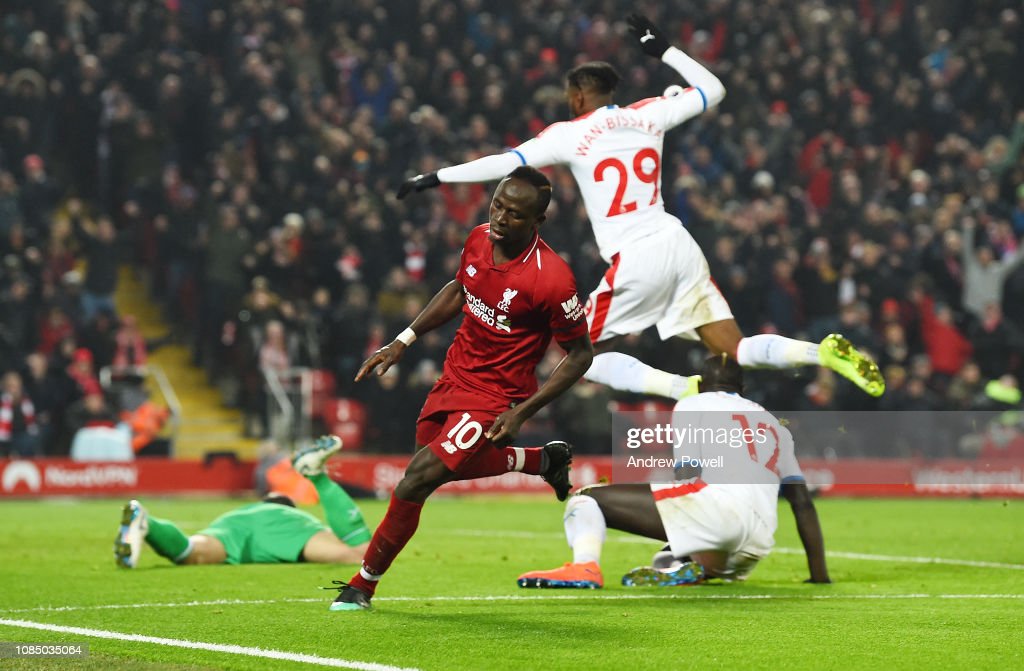 But the game had one more surprise in store. As Palace charged forward, Townsend sent a dangerous cross into the box towards Wickham who laid it off nicely for the incoming and inexplicably free Meyer. The former Schalke midfielder took his shot like a penalty, straight into the bottom corner. 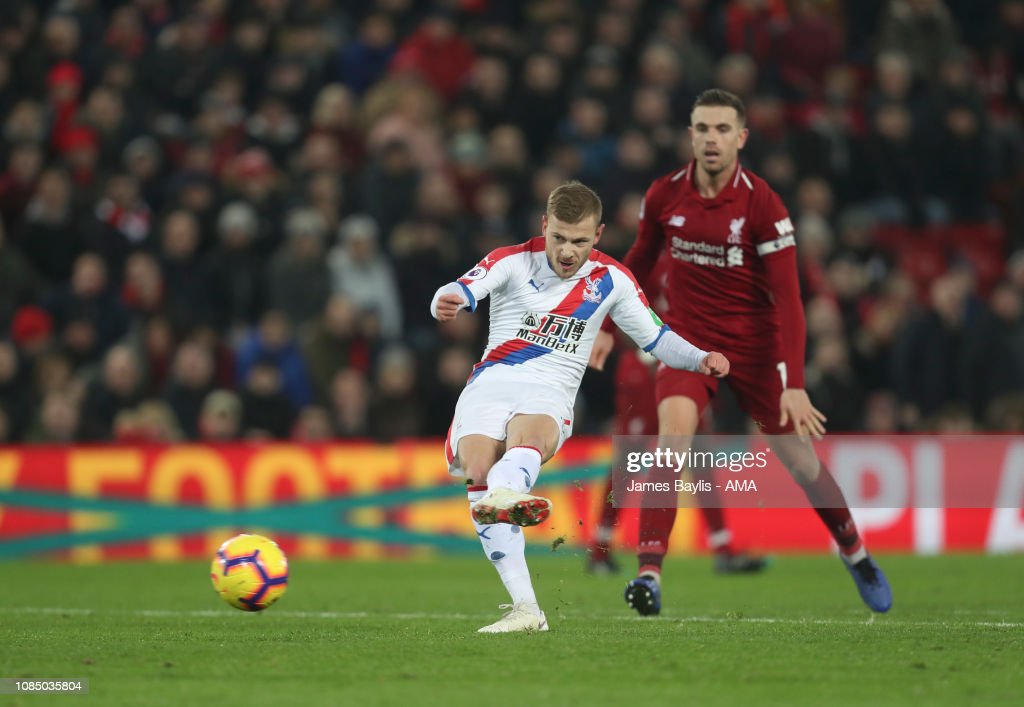 As expected, the two injury-time goals added an extra 60 seconds to the proceedings and Palace had one more go, but it ended with Wan-Bissaka sending a long-range effort sky-high.

Naturally, the immediate impression was – a nervy finish and a huge sigh of relief on the final whistle. There’s rarely much sensible to say after a seven-goal thriller, and this one was as crazy as they come.

But no matter. The important thing, as always, is booking another three points, and nobody can argue against the fact that the Reds deserved it. They showed a strong desire and beat a very good Crystal Palace team with sheer quality, perseverance and hard work.

The gap behind Liverpool is seven points again, which means the pressure is back on Manchester City.

Next up, it’s Leicester City at Anfield on the evening of January 30th.