It was always going to come down to these two teams, wasn’t it? Even before the season had started, the football world predicted a title race between Liverpool and Manchester City, slightly favoring the defending champions perhaps. But not many expected this kind of result string from the Reds; their best start to a Premier League campaign ever.

Apart from the usual names (Alex Oxlade-Chamberlain, Joe Gomez and Joel Matip), there were no fresh injury worries for Jurgen Klopp ahead of this game. James Milner had recovered in time to face his old club.

Pep Guardiola had one particular part of the pitch troubling him, always likely to be vital when playing against Liverpool. Left-backs Benjamin Mendy and Fabian Delph were both out, due to injury and suspension, respectively. Kevin De Bruyne was mentioned as a potential doubt, and Fernandinho lately missed a few games, but both midfielders recovered for this one. De Bruyne was, however, on the bench.

The Reds started the game showing nerves. First Mane clumsily lost the ball, then Alisson’s attempt of a long pass went awkwardly out for a throw-in.

Buoyed by that, the home side pushed hard, pressed high and kept the Reds pegged in their own half. Within three minutes, Sane went around Trent and whipped a sharp cross into six yards, but Alisson picked it up. Fernandinho put in a few trademark tackles, first on Mane and then Robertson, just to keep the pressure on Liverpool players up.

The Reds hit back in the ninth minute, with Robertson sending a pass forward for Mane who sent Trent running on the right. Trent’s cross bounced of Kompany and Ederson had to be alert to grab it on the line.

And as Guardiola’s team still looked more determined, Liverpool almost took the lead at that point, twice in a row. First, Salah put Mane through and the Senegalese beat Ederson and hit the post, Stones tried to clear it but hit his goalkeeper and had to blast it off the very line to prevent what would have been a strange own-goal. Then Trent whipped in a cross and Mane caught it on a volley – straight at Ederson.

In the 20th minute, Trent cheaply lost the ball and forced Lovren to take out Aguero, getting himself in the book for it.

City bounced back and locked Liverpool in again, and in the 25th minute Sane again got through on the left and squared it across, and van Dijk made a vital clearance. Three minutes later, Fernandinho’s lobbed pass found the run of Sterling on the right and Sterling’s pullback found David Silva 10 yards from the goal, but van Dijk was there again.

Fernandinho was doing a very good job for his team. He was very alert to the movements of Firmino, and he did much to nullify his creativity, often cutting in front of him and making interceptions.

With half an hour gone, Kompany made a hard tackle on Salah over 40 yards out, taking him out in order to stop him from going alone towards Ederson. Thus City got a centre-back booked as well, and he’ll consider himself lucky for it.

Three minutes later van Dijk again had to clear a ball squared into six yards by Sane. The German winger was a true handful, and in the 38th minute Wijnaldum became the third name in the book for a foul on him. Soon afterwards he broke through again, escaped Trent and beat Lovren, and Alisson stopped his cross.

But there was no stopping Aguero’s incredible thunderbolt from six yards as City recycled the attack, and eventually Bernardo Silva gave it to the Argentinian who slammed under the bar from a very difficult angle. 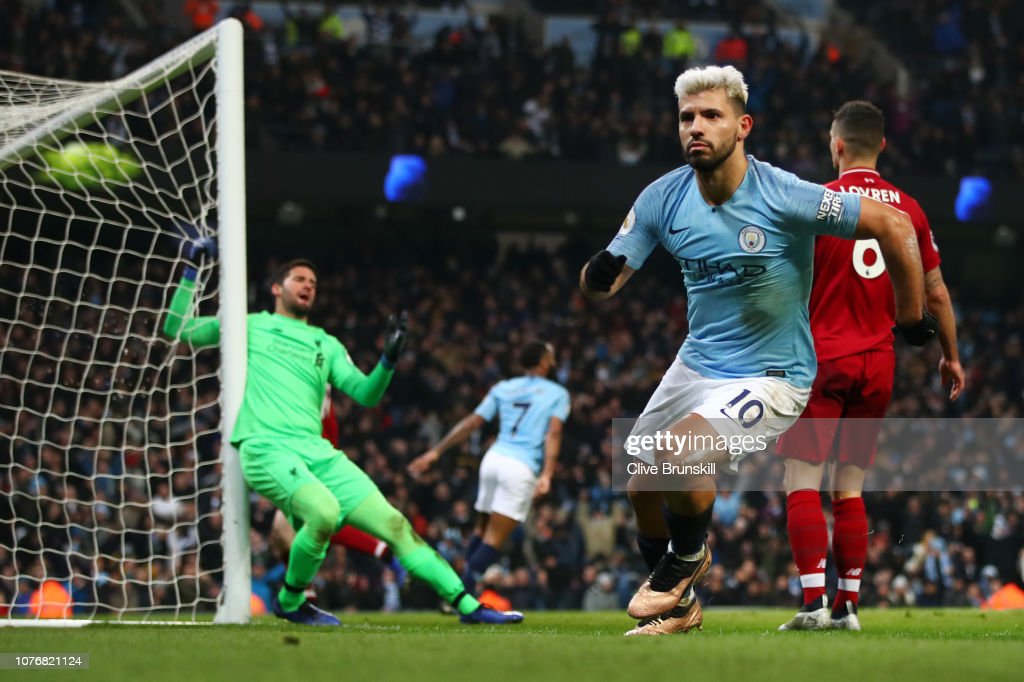 Liverpool mostly held the ball from that point on, but they weren’t finding any ways through the compact City shape. In the end, it was a sloppy foul by Laporte on Milner that gave them a break they needed, and City looked far from convincing in defending the set-piece, but somehow they managed it.

Naturally, both teams came into the second period to attack. Both sets of players pressed high now and a fierce battle was developing in the middle. For a long time it seemed it was the matter of who blinks first.

Unfortunately, it was Liverpool whose passing got a bit sloppier eventually, and it allowed City to recycle their attacks quicker for a while. But the home team weren’t creating much upfront, and Liverpool threatened on 56 minutes when Robertson’s cross from the left got only half-cleared, and Trent volleyed it from the edge of the box just wide.

Then Milner made way for Fabinho.

Guardiola’s game plan was working well. His players were always perfectly positioned to hinder Liverpool from playing out from the back, and yet the Reds were still trying to – leading to repeated mistakes in passing.

But Liverpool almost levelled the score in the 63rd minute. David Silva made a unnecessary foul on Mane in the middle of the park, and Salah sent it into the box. Ederson came for it, but Kompany, who wasn’t aware of his ‘keeper’s idea, got in front and tried to head it away. It reached Firmino and several City players rushed back towards their goal to cover for the missing Ederson. Eventually, the City captain redeemed himself as he blocked Firmino’s shot and cleared his box.

There was nothing they could do to stop Firmino in the very next attack, however. Trent whipped a brilliant ball from the right flank to the left and Robertson squared it across, fooling the City back line along with Ederson and putting it on a platter for Firmino to nod in. 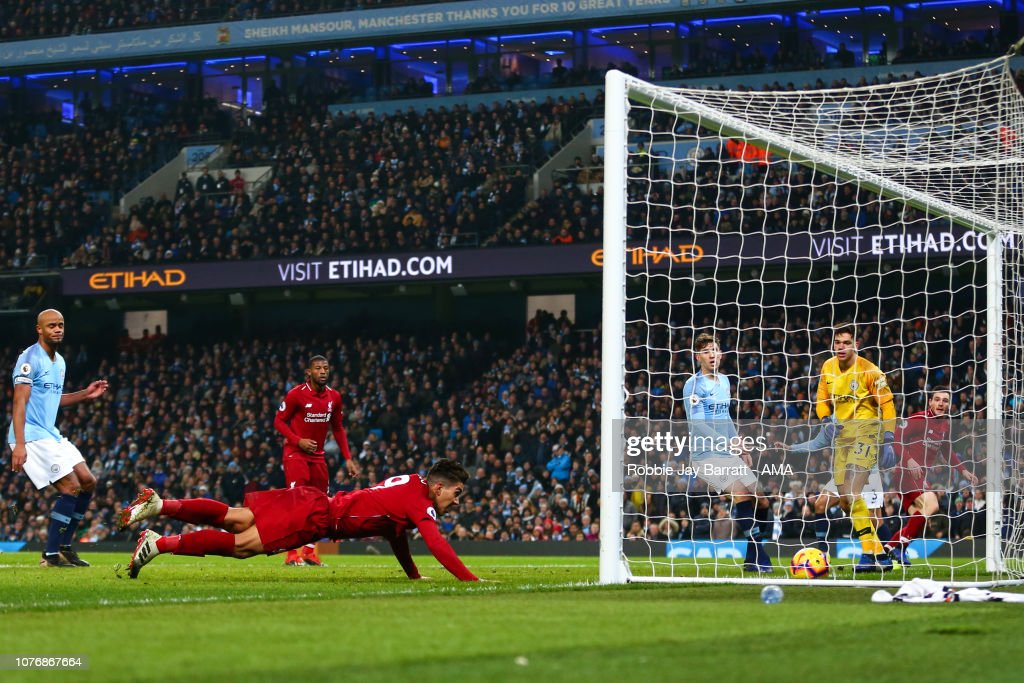 With 20 minutes remaining and the score turning on him, Guardiola took off David Silva and sent on Ilkay  Gundogan. But before the former Dortmund midfielder could make any contribution, Sane had his team back in front.

Liverpool held a high defensive line as they awaited an onset. Aguero went wide to the left, and as the ball went that way, he abandoned it and cut inside, taking Trent with him and leaving the space and the ball for the incoming Sane whose shot to the far corner beat Alisson as it bounced off the post and went in. 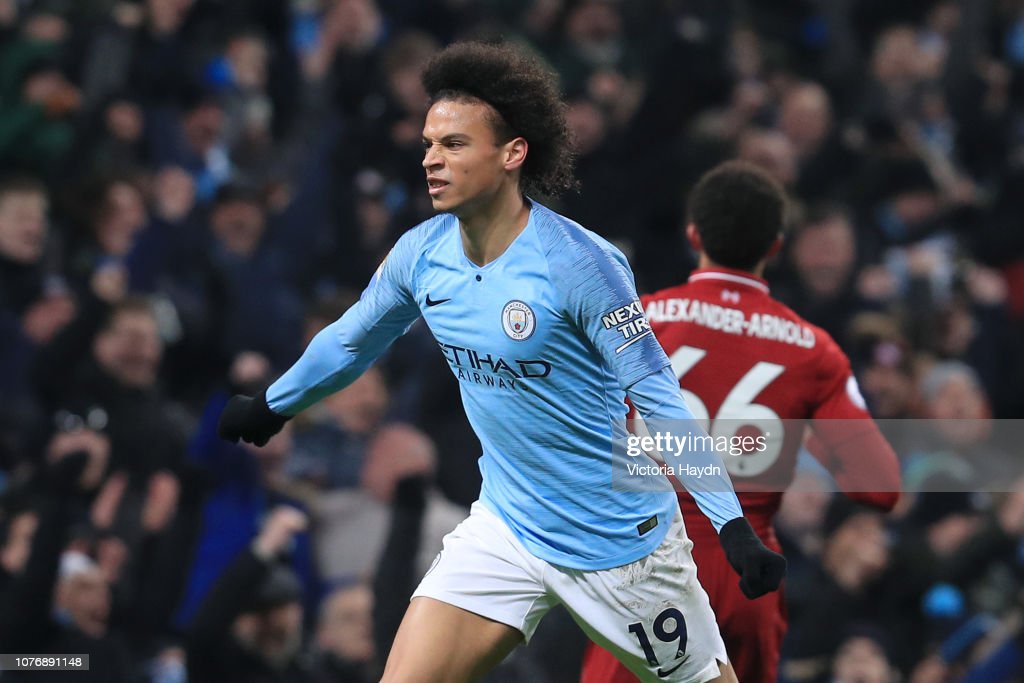 Klopp wasted no time. He replaced Mane with Xherdan Shaqiri.

With 11 minutes to go, Trent was caught napping as Aguero smartly took Lovren out of position and opened up acres of space for Sane again. Seeing Liverpool’s defence catching up, he squared it across for Sterling to kill the game off, but Robertson stopped him with a superb piece of defending. In the very next minute, Liverpool conducted a patient attack that got City defending for their lives, and as they cleared their box, Sterling led a swift counterattack. The former Liverpool winger smartly drew van Dijk on him and released Aguero in behind. Aguero entered the box and tried to go around Alisson, but the Brazil No.1 put out a strong hand to deny him. 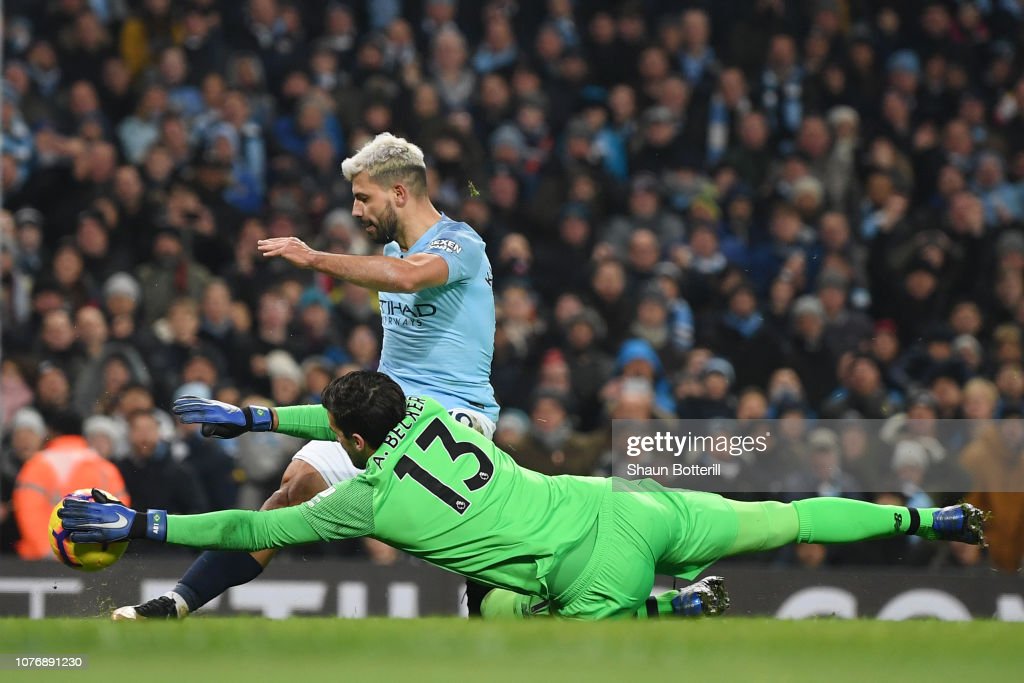 It was then Liverpool’s turn to hit swiftly, and Shaqiri released Salah into the box. Salah took a shot under pressure from Stones, hit the target and forced Ederson into a fine save.

Five minutes before the 90 were up, Klopp replaced Wijnaldum with Daniel Sturridge, while Guardiola took out Laporte and sent on Kyle Walker. Soon afterwards he replaced Kompany who complained about an injury with Nicolas Otamendi.

Clumsy defending gave Sterling another chance to make it three, but he missed the target completely unobstructed from the penalty spot.

The five minutes of injury time saw Liverpool attack fiercely and cause scramble after scramble in City’s box, but there was simply no way through.

It just wasn’t meant to be. Looking at the full 90 minutes, it was a fairly even game. Yes, the home side looked like they had more of it in their hands and Guardiola finally got his tactics right against Liverpool, but given Liverpool’s chances and the amount of luck that went against them in certain moments, it could have easily swung the other way and it wouldn’t have been unfair.

In the end, a fine margin in terms of performance led to a fine margin in terms of result. If a City player deserved to score the winning goal in this contest, it was Sane. He was brilliant on that left flank, well supported by Aguero whose clever movements were just what the young winger needed, and even Laporte provided much support in attack by offering Sane an easy way out when under pressure.

It wouldn’t be fair to say that Liverpool didn’t get their game going. They had several swift trademark moves that resulted in some excellent chances, but they lacked just a little bit of sharpness in those moments, and their unbeaten run in the Premier League ends at 20.

The Reds still top the table, but their lead ahead of City has been reduced to four points again, with Spurs also close on six.

There’s nothing left now to do but hope the team will pick it up again against Brighton & Hove Albion on Saturday next (January 12th), but before that they will open their FA Cup campaign for the season with a trip to face Wolverhampton Wanderers five days earlier.