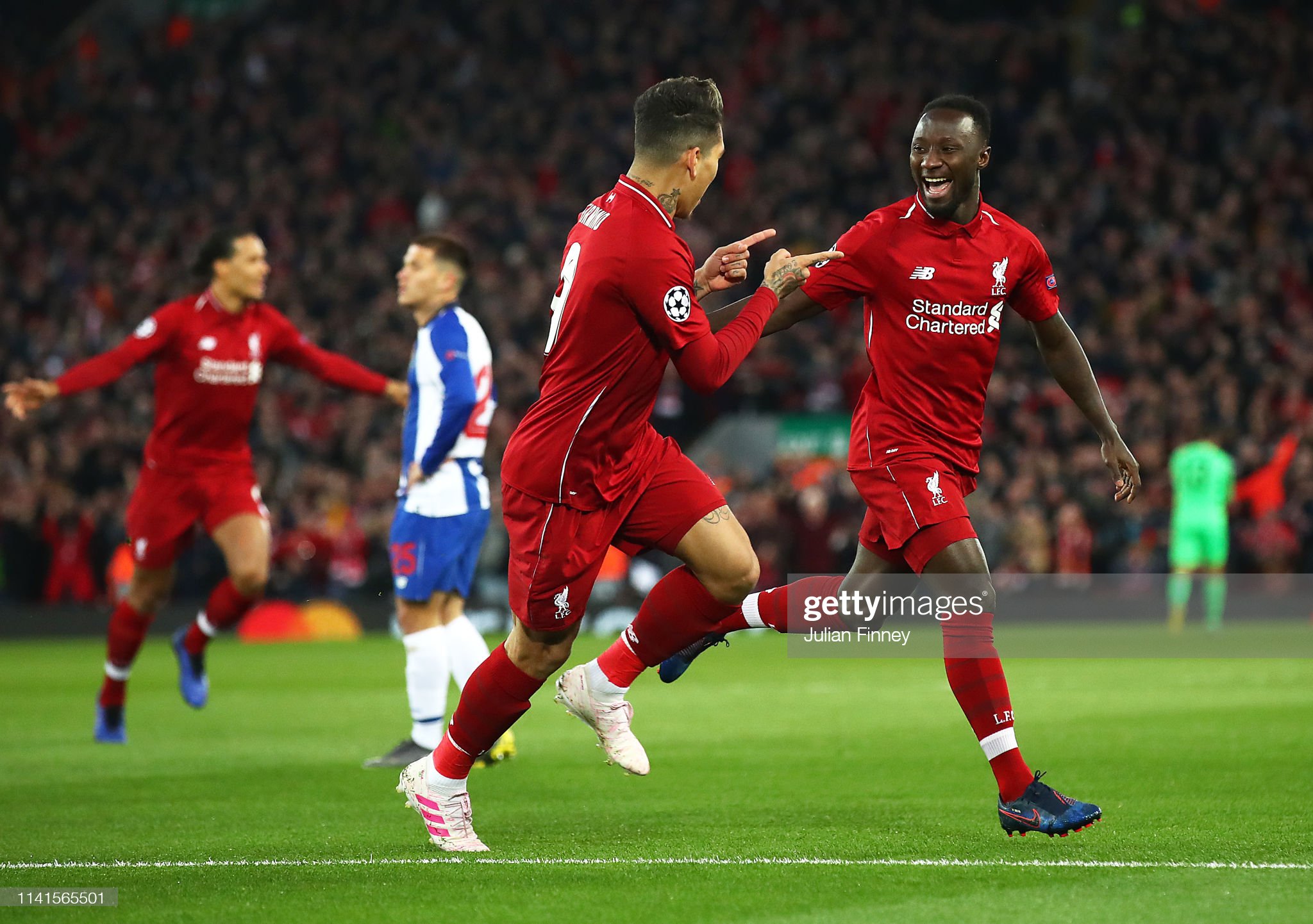 On Tuesday night, away from the drama that is the Premier League title race, Liverpool played hosts to Portuguese Champions, Porto, in the quarter-finals of the Champions League. The Reds ran out comfortable victors against the 2004 competition winners with the tie ending 2-0 in Liverpool’s favour.

Naby Keita and Roberto Firmino were on the scoresheet to give Liverpool the advantage going into the second leg at the Estádio do Dragão against Porto on the 17th of April.  For a more in depth look at the match, check out Vesko’s match report here.

Alisson wasn’t really busy in this champions league tie despite Porto managing 8 shots with 3 of these being on target. Alisson’s main action came in the first half with Porto looking dangerous on the counter. Moussa Marega forced Alisson to make a brilliant save after he was played one-on-one with Brazil’s number one.

Alisson was fairly comfortable on the ball and only really had one moment with Alexander-Arnold where a poor decision led to the ball firing against Trent’s arm. This led to a VAR review for a penalty, and this claim from Porto’s players was rightly denied. Other than this Alisson had a fairly solid game and produced when he was called upon. 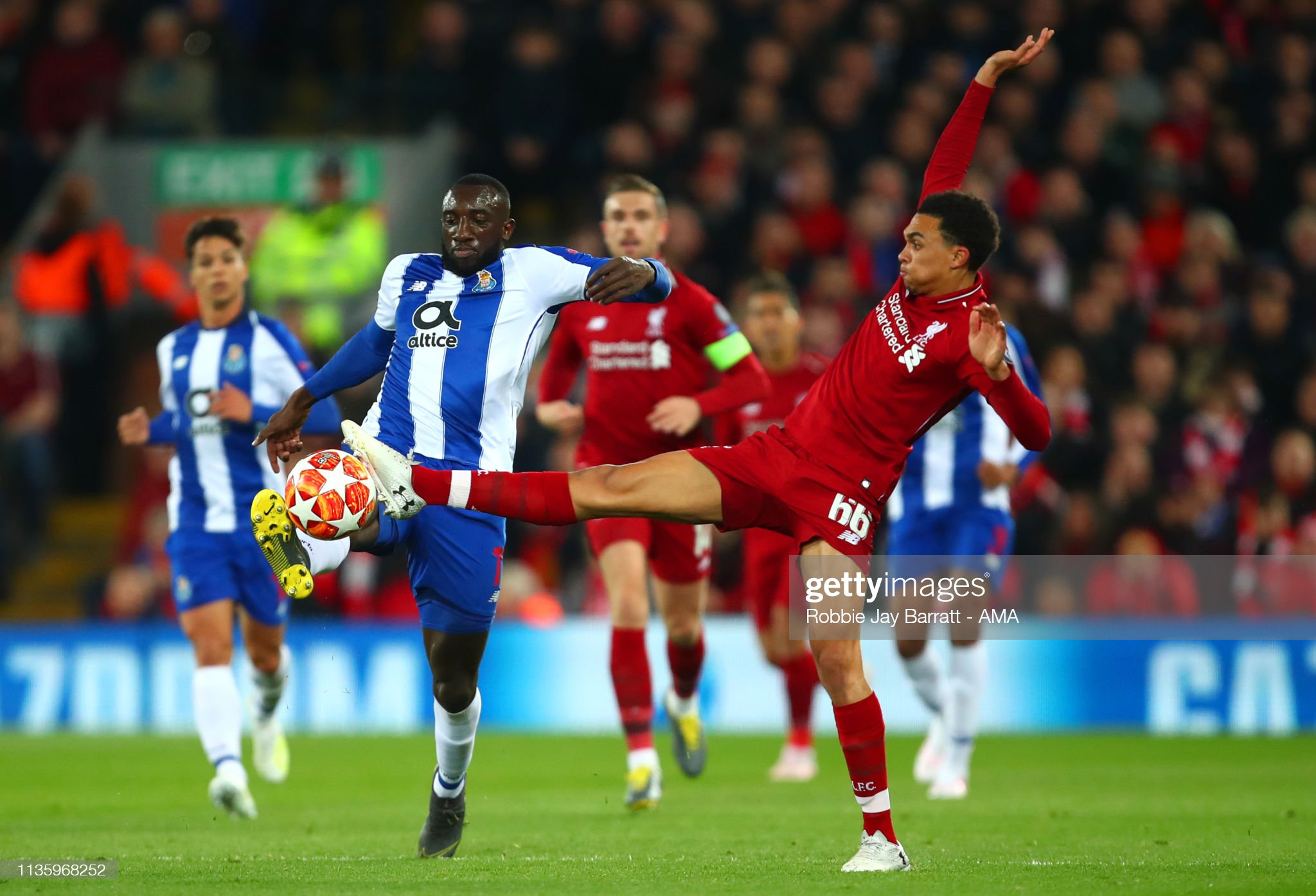 Alexander-Arnold continued to do what he did best against Porto, bombing down the right wing looking to get forward for Liverpool’s attacks to provide support and provide the support he did. Arnold was instrumental in Liverpool’s second goal after he played a perfectly weighted cross through to Firmino who could tap in from close range.

He was dangerous on the right-hand side all night with some dangerous crosses. At times him coming forward, left Liverpool vulnerable to counter attacks from Porto and they had some joy with this. However, he tracked back quickly and was reliable as ever defensively.

Lovren made his return to the starting 11 for Liverpool in this game against Porto and made a big impact defensively. He was evidently an area that Porto tried to exploit with Marega making runs in between him and TAA but Lovren with the help from Van Dijk was able to keep the Malian international quiet for most of the game.

Lovren was excellent with the pressure he applied when jockeying Marega and wasn’t rash in the tackle to stop the Porto forward.  Overall, a solid performance from the Croatian international on his return to the starting 11.

Van Dijk, as well as Lovren, had a good game defensively. He continued to be a commanding presence at the back and intercepted or cleared any balls that came his way. The Netherlands captain continued to showcase his new trademark chest interception rather than opting for a headed clearance, showing just how boss he really is.

A solid performance from Virgil overall as teamed up with Lovren once again, on a night where they both nullified most attacking threats that Liverpool received from Porto. Van Dijk will also be happy after Liverpool gained what he loves most, something the Reds have gone 5 games without- a clean sheet.

Milner returned to his former left-back position, due to the absence of Robertson after the suspension he received in the 3-1 victory against Bayern Munich in the round of 16. He was sound positionally and whenever he was called upon defensively, he showed no real signs of getting beat.

Milner but out a good shift for Liverpool and contributed to a resolute performance defensively from Liverpool that led to a clean sheet. However, it was evident that Liverpool missed Robertson’s ability to bomb up and down the left flank with Milner not quite having the legs to be able to do this at the same work rate as Robbo week in week out.

Fabinho looked a bit shaky in the first half for Liverpool and wasn’t the same presence as he normally is in the air after getting beaten to quite a few high balls. He improved in the second half and provided a shield for Liverpool’s defence as Porto upped their tempo to try and grab a vital away goal.

Despite his recent form, it was a surprisingly below-par performance from Liverpool’s brilliant Brazilian.

After his heroics from the bench against Southampton last Friday, Henderson turned out another impressive performance against the Portuguese champions in this Champions League clash. Henderson played in the No.6 position and flourished. He found himself in excellent space due to good positioning, offered himself superbly in the wide areas and provided a great passing performance also to progress play forward.

The Captain’s passing performance was summed up with an exquisite pass he played in the build-up to the second goal. Firmino fizzed the ball to him where he had lots of space to play a perfectly weighted ball towards the byline for Trent Alexander Arnold who crossed to Firmino to make it 2-0. Another superb performance from the England international as he continues to silence his critics. 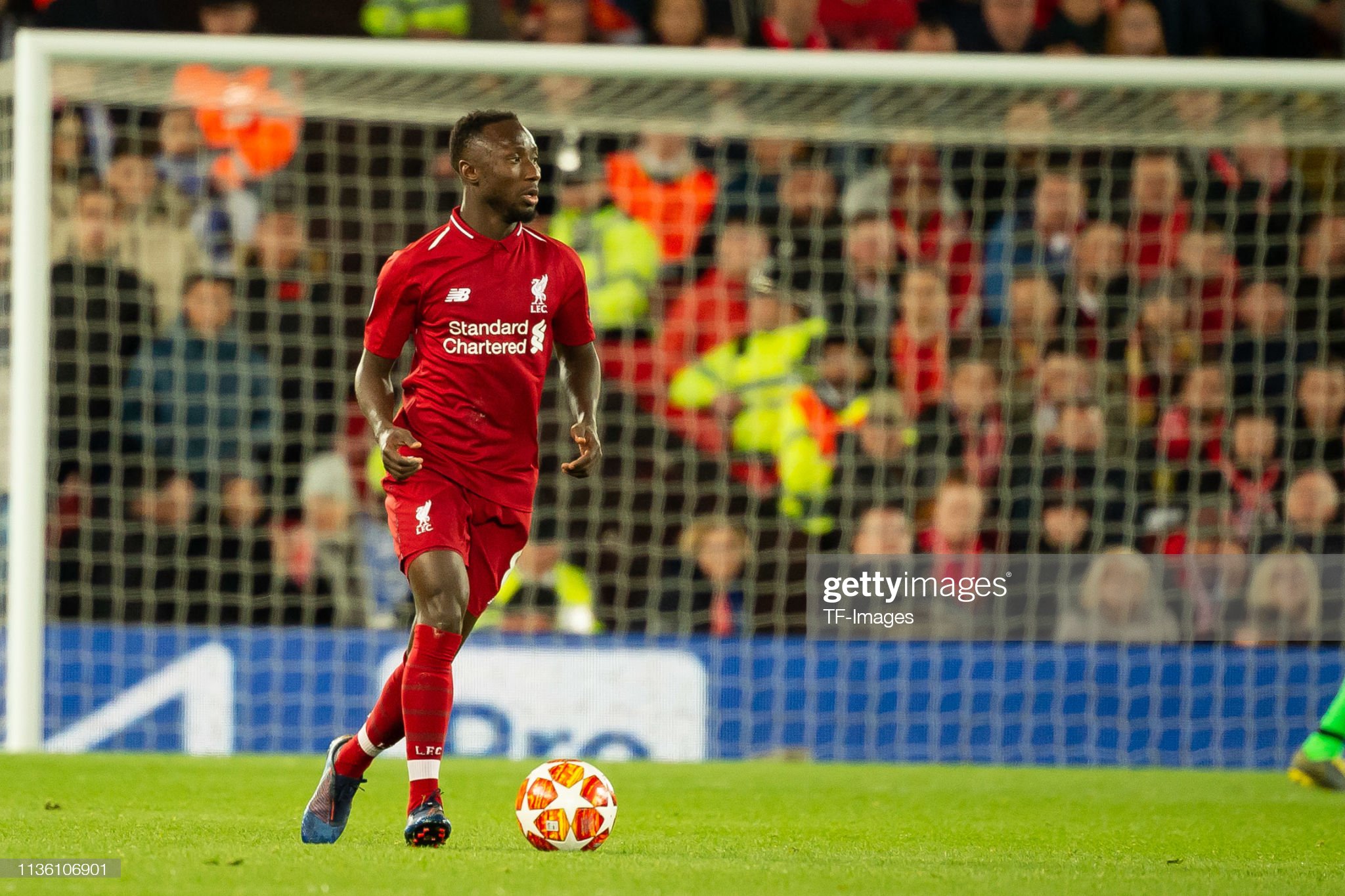 Keita went on to score his first champions league goal for Liverpool in this game, after 3 days earlier scoring his first league goal for the club taking his tally to two for the season. He received the ball on the edge of the box from Firmino before he received some good fortune when his strike deflected out of Casillas’ reach.  Despite receiving some luck, Naby deserved his goal as he produced a good performance.

Liverpool’s number 8 was integral in moving the ball quickly and showed why Klopp spent £52 million on him with his ability to progress the ball quickly and beat a player with ease. Like Henderson, another solid performance from Keita who continues to silence his critics that say he was a waste of money.

This wasn’t Salah’s best game in a Liverpool shirt, but it definitely wasn’t a bad one. The Egyptian’s decision making was a bit off at times as in some situations he was going for goal rather than looking for the pass and also, Mo arguably should have had scored in the game after missing a one-on-one with Casillas. However, despite missing the chance, he showed excellent awareness and pace to latch onto the loose pass from Otavio.

Salah’s best contribution was at the opposite end of the pitch to which you’d expect. He showed excellent pace and determination to get back to prevent a Porto counter attack showing he isn’t one of these forwards that isn’t willing to put in a shift defensively. 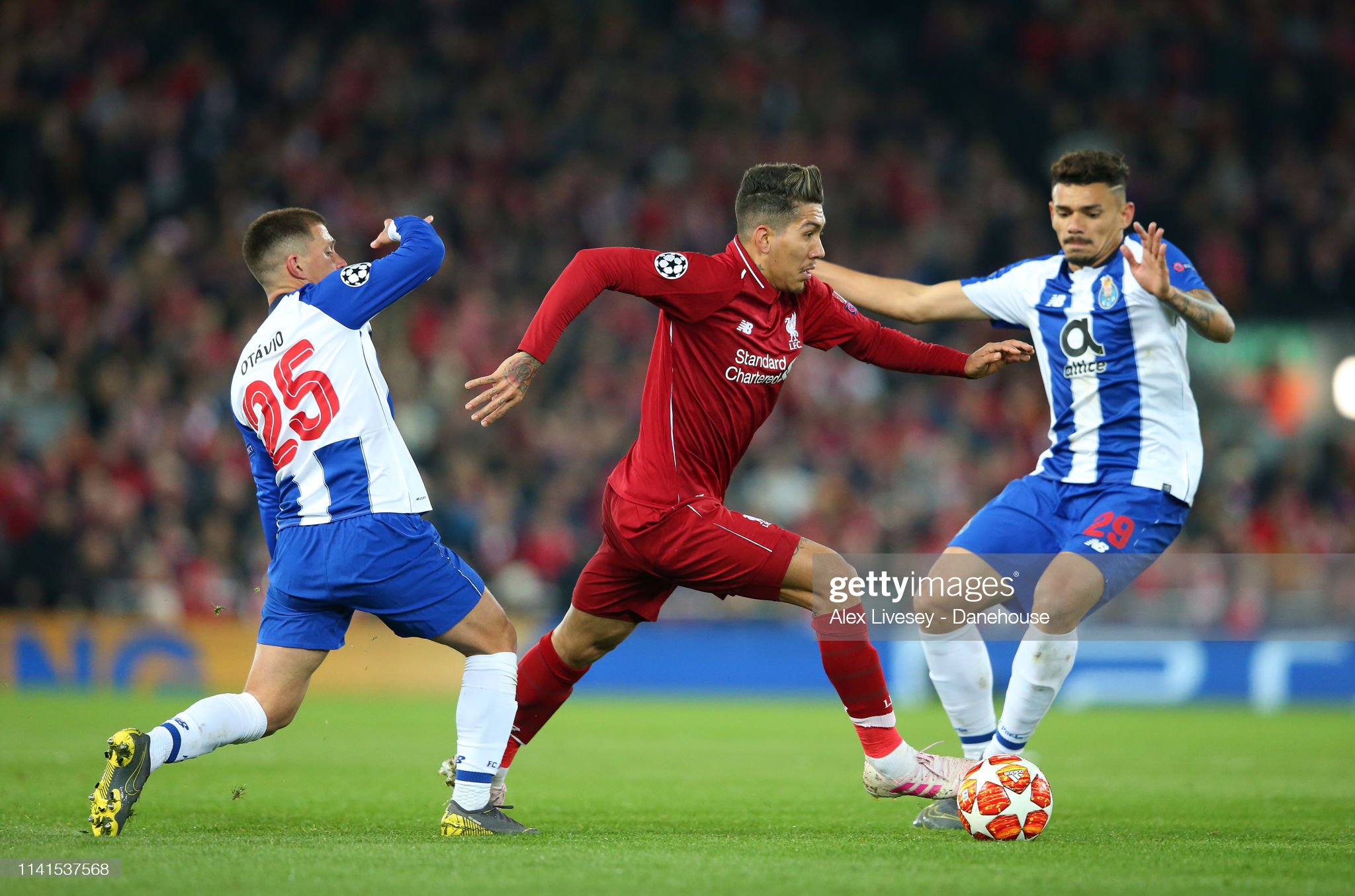 Bobby was bang in form for the Reds as he played a major part in both goals, grabbing a goal and an assist. The Brazilian international was excellent in build-up play after assisting Naby for his goal but also starting the move for his own goal. He showed excellent timing for his goal, after starting the move with his pass to Henderson, to ensure that he was onside when Arnold put the ball on a plate for him. A trademark no-look finish saw him put the ball in the back of the net.

A stellar performance from Liverpool’s number 9 as he begins to pick up a bit of form for Liverpool’s massive run-in that is yet to come.

Mane had a solid game against Porto putting in a good shift for the team. He didn’t have the same impact as last season’s Champions League tie where he scored a hat trick, but nonetheless, it was still a good performance. He played a big part in the first goal after he shook off advances of Porto pressure with a lovely pass to Firmino who could assist Mane’s best mate in Naby Keita.

Liverpool’s Senegalese forward was left disappointed when he had a goal disallowed for a marginal offside decision to deny Klopp’s men a third goal. However, despite his goal, he offered a good shift and was a big presence in Liverpool’s attacking prowess throughout the match.

Overall, it was a solid performance from the lads. Henderson, Keita and Firmino, in particular, all caught my eye with excellent performances, making it difficult to decide on a man of the match. It was also great to see Lovren back in the starting 11 after a long time out on the sidelines with injury.

We arguably should’ve and could’ve scored more goals but 2-0 is a good advantage to take to Portugal and it was imperative that we kept a clean sheet.  If we score in Portugal, Porto will need to score 4 which is unlikely, so another goal should be enough to see us through to the semis.