The case of a new contract for the Belgian hero.

Heroics vs Everton and Barcelona.

Potential still to be world class?

Divock Origi is going to be entering his final twelve months of his contract with club since signing for us back in 2014 on a five year deal from Lille. In the last five years Origi has had an interesting time, everything from his breakout to living on the periphery at the club. During the season of 2015/2016 Origi managed to score 10 goals in 33 games for the club which at the time he was only 21 years of age and was behind first choice striker at the time Daniel Sturridge.

The next season Origi was used predominantly as a sub due to a few injury’s that he suffered namely the one he suffered vs Everton when Funes Mori stood deliberately on his ankle. He would then go on to suffer from a calf injury and then muscular problems which hampered his progress at the club. Making a total of 43 appearance’s during the 2016/2017 season he managed a goal haul of 11 goals.

In the 2017/2018 season Origi was sent out on loan to Bundesliga side Vfl Wolfsburg, he managed to play 34 games for the German club but could only manage 6 goals. This could be boiled down to the fact that he was been played out on the right wing for the majority of his time.

On his return for the club in the 2018/2019 season Origi would score his first goal of the season (the winner) in the Merseyside Derby, worth noting that this is his 3rd goal vs Everton. He would also be the man to score the winner against Newcastle which had kept the club in the hunt for their first title. Origi would go on to score for the first time in the Champions League, netting a brace against Barcelona his second being that vital goal that would complete Liverpool’s comeback from the first leg.

So why should the club award him with a new contract?

Well to answer it frankly Divock is still only 24 years of age so there’s a real possibility that he’s yet to reach his prime and he could peak at the right time if he continued to stay at the club, it should be also recognised by Klopp and the clubs hierarchy that he’s shown great resiliency by still working very hard in training and on the pitch to stay in Klopp’s plans for the team.

“If you’re in the penalty area and don’t know what to do with the ball, put it in the net and we’ll discuss the options later.” – Bob Paisley 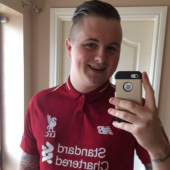